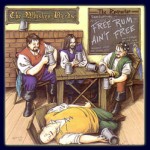 How do you define courage? There are many ways – far more than I care to get into at this time. But if I were truly put to task to come up with a single, all-encompassing definition, it might include four gentlemen singling “Bell Bottom Trousers” in the first person. Hearing their manly voices belt out lyrics regarding “he layed me on the bed until my blue eyes turned to brown” is both amusing and off-setting. An odd, odd creative choice, and in this way, quite memorable and worthwhile.

On their album The Recruiter… Free Rum Ain’t Free, the Whiskey Bards venture forth more than once into gender-bending fields, although “Bell Bottom Trousers” is by far their boldest effort. However, lest you think this album is a tome of cross-dressing daintiness, let me set the record straight. Not only will you find many traditional favorites – all sung in an easy-on-the-ears, lyrical manner, and (with exception of “Bell Bottom Trousers”) appropriately gendered. Included are Henry Martin, Fireship, The Derelict, and several more. But as anyone who’s familiar with the Whiskey Bards knows, it’s their original work that truly stands out.

We begin with the album’s titular track, “The Recruiter… Free Rum Ain’t Free”, being a cautionary tale told in a somewhat more lighthearted manner than one might expect, even delving into the upsides of getting shanghai’d to sea. As with many of their songs, the various singers are well varied in character – of particular note is the Scottish accent of one of the singers, which leads a period-appropriate yet humorous quality to many of these bits. “Great to be a Pirate” comes next, also of the light-hearted variety, which is enjoyably in contrast with the lyrics that repeadedly wind up at the gallows. “Devilish Mary” is an energetic yet oh-so-sinister song about a woman scorned (these never end well – at least not for the one who didst the scorning.)

“Drunken Billy” and “Smoother Waters” are two more enjoyable original tracks that also follow in the Whiskey Bards fun-loving vein, but “Pirate Lullaby” sees them depart from their typical upbeat nature to take a more somber approach. It’s a lovely song, and the soft, deep tone it follows plays remarkably well. “Life of a Privateer” marks a return to their usual approach, being a lively song about serving various nations in times of war. I could complain that the final cannon blast of this song sounds more like a toilet flushing, but I won’t because it amuses me. The album’s final song, appropriately titled “Final Journey” is again slower, more poetic piece, and very good indeed.

The majority of The Recruiter… Free Rum Ain’t Free is sung a capella, with some occasional guitar work thrown in for good measure. From beginning to end it provides a highly enjoyable listen. For the most part the vocal quality is on the friendly side, lacking the graveliness that often suits the pirate medium so well, and as a result the album can sound somewhat “harmless” upon first listen. But I found it quickly grew on me, especially as I listened more directly to the lyrics. That said, I would make a point of recommending the Whiskey Bards non-pirate (but pirate-friendly) album Bottoms Up – being a much more risque project in which their “friendly” (and sometimes Scottish) voices are put to hilarious effect.