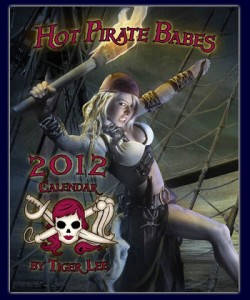 Pearl smiled at me sympathetically.

I share this story because it brings to light an important, if oft overlooked, benefit of hanging a Hot Pirate Babe calendar on your wall. As pirate enthusiasts, many of us attend several pirate festivals throughout the year. Also in attendance, likely as not, is cleavage. Lots and lots of cleavage. It can be overwhelming, and even a little dangerous, because cleavage can sometimes (usually) distract the onlooker from what lurks beyond the cleavage – namely a woman’s inner beauty/crazy/intellect/spitefulness, as the case may be. And this leads us to the true benefit of this calendar. 12 months of pirate hotness, always accompanied by heaving cleavage. As with a tetanus shot, this repeated low-dosage exposure can galvanize your immune system, thereby making you less vulnerable to the real thing. It’s a theory, anyway.

In past years I’ve done a detailed, month-by-month comparison of the girls – which ones are sexiest (June and October), which ones are angriest (March), which ones are good at winking (August), and which ones aren’t (September). But this year it feels rather unnecessary – you already know if you want this calendar, and all I need do is assure you it maintains master photographer Tiger Lee’s historical standards for capturing female pirate hotness in its many and varied forms (which it most certainly does.)

So yes, consider yourself assured that fans of previous Hot Pirate Babes can look forward to another year of the piratey hotness you’ve come to expect. And if you’re a reader who’s currently saying, “Hot Pirate Babes Calendar? I never knew such a think existed! But should I really purchase such a thing in a down economy?” then just remember that you’re not only getting an awesome calendar, you’re also building a mighty fortress in your heart and mind against the powers of cleavage throughout 2012 – and can you really put a price tag on that?