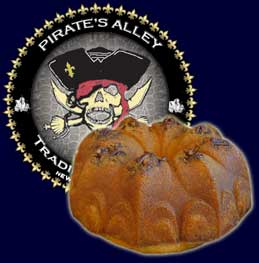 The cake arrived in a large tin with the company logo on it – a menacing jolly roger that let’s you know it was made by folks with piracey coursing through their veins. Opening the tin revealed a plastic-wrapped, donut-shaped pastry that smelled both rich and slightly nutty. Upon tasting, the cake itself is heavy and moist with a buttery-rum flavor that borders on creamy. Densley made, a small slice goes a long way – none of your crew should have to go hungry with one of these nearby. Never ones to do things the simple way, my own crew and I opted to sever up the cake and serve it with vanilla icecream and home-made caramel sauce, which proved to make for a fantastic (and wonderfully rummy) experience.

This was an impressive cake, indeed. But what impressed me even more was the overall business that Pirate’s Alley has going. Carrying a small assortment of rum cake products, rum-soaked cigars, and voodoo dolls, Pirate’s Alley is steeped in piratey goodness. And they score bonus points for working in cooperation with another wonderful New Orleans business by making all their products exclusively with New Orleans Rum, which adds a delightful regional flair to their products.

A fine cake from a fine company, and well worth the effort to check out!