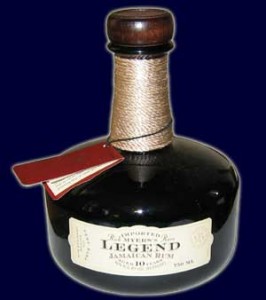 Myer’s Original Rum is a grocery store staple – I can’t imagine it not being available most anywhere. Myer’s Legend, on the other hand, is a rare prize. Compared to its more common cousin, Myer’s Legend is less bitter and less coppery. It’s warmer, smoother, and in a nicer bottle.

That last comment about the bottle isn’t meant to be snide. Drinking rum is about the entire experience – and that experience begins with the bottle. Short and wide like its seagoing ancestors, the Myer’s Legend bottle is wrapped in cord which contrasts beautifully with the dark brown glass. The rum that pours forth has a gravity, but not too much so. It smells faintly of molasses, but mostly this is rum – plain and true.

Myer’s Legend can be largely defined by what it is not – it’s not overly heavy or sharp. It’s not bitter or complex. But it is dark, and it is rum. It’s a dark rum, free of pretense or distraction. This pure simplicity makes it a treat, but one that’s best enjoyed in moderation. Not only would it get boring as a staple rum, but I also found it a little too anxious at inducing hangovers – even two small glasses left me with a lightly nauseous headache the following morning. That said, when you’ve been cruising through the world of rums for some time, experiencing everything from the complex to the exotic to the downright deadly, a glass of Myer’s Legend Rum can be a delightfully centering experience, reminding you of what rum – beneath all the subtleties – should be.