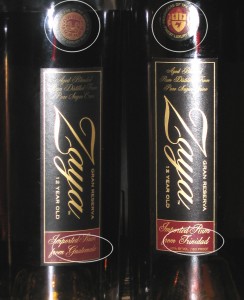 So a while back I began receiving emails about Zaya 12 Year aged rum. It seems that the distillery has relocated from Guatamala to Trinidad. While this isn’t in itself a good or bad thing, there were also reports of a distinct drop in the rum’s quality as well. In fact, old Guatamalan bottles of Zaya were quickly becoming difficult to find as they became presumptive collectors items. I count myself fortunate to have scrounged up one of the last remaining bottles from a local store, thus making it possible for me to do a proper side-by-side comparison.

In the bottle, the new vs. old Zayas are nearly identical. The dark amber color is a near perfect match, and it’s only by holding up to the light and looking carefully that you can tell the old Zaya is slightly redder, while the new is a bit more orange. The bottle structure and labels are also nearly identical, although the script beneath the rum’s name now reads “Imported Rum from Trinidad” rather than the former “Imported Rum from Guatamala”, and the small disc above the tag now bears a tropical coat of arms instead of the previous sun-god looking thing.

To the nose, the difference is much more immediately apparant. Old Zaya smells of bananas, fruit, and sugarcane. It’s cool and clean – not as musky as many darker rums, nor as oaky. In truth, the aroma is distinctly light for a dark rum, but still very rich. New Zaya is a stark contrast – still very sweet, but this time more of raisins. It also smells much sweeter, and more syrupy. It reminds me more of the profile I would expect from an Indian rum, rather than Caribbean.

Of course, with any beverage the ultimate factor is taste – and as usual, taste here neatly follows nose. Old Zaya is indeed very smooth. Its sticky sweetness lacks the heady molasses kick I prefer, but the quality is clear just the same. It doesn’t boast any real burn going down, but a definite warmth is left behind. New Zaya feels still warmer on the tongue, and boasts a sweeter, more candy-like taste. It’s not quite as smooth, and has just a slight “cough syrup” sensation about it, but overall it still tastes of a quality – albeit different – product.

All told, I’m not inclined to declare New Zaya a drastic reduction in quality from Old Zaya. But it is certainly not the same rum. Old Zaya is clearly the more appropriate choice for sophisticated palettes, while New Zaya seems best for those who enjoy higher end flavored rums such as Captain Morgan’s Private Stock, Sailor Jerry, or Kilo Kai. In fact, it could be an excellent transition rum for those wishing to remove the training wheels of the spiced rums. However, those of us already well acclimated to the world of rums – particularly those of us who enjoy a little gunpowder in our swill – will find the new Zaya a stark departure from our prefered tastes.