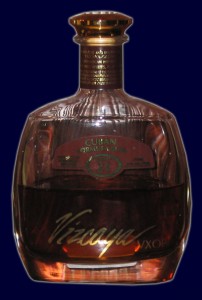 One of these days, I think I need to write an article on which I judge various rums based on nothing more than their packaging. It might sound laughable, but in truth packaging can tell you quite a lot about a rum (or at least, what the manufacturers think of their product – or rather, what they want you to *think* they think of their product.) And also, reviewing rums based on packaging alone would protect me from those embarrassing times when I nearly finish the rum before I’ve bothered to review it. Such is the case with Vizcaya VXOP – it’s been on my shelf for a terribly long time, and I’ve stolen a glass now and then to the point as to be nearly empty. And yet, I never reviewed the damned thing.

So let’s do so, and yes, we’ll begin with the packaging. First off, I love odd-shaped bottles. Something about it just tickles me and makes me want to believe the rum inside is special. I also love corks – proper, natural corks. Vizcaya has both of these fine attributes, but it’s the front and center label of “Cuban Formula Rum” that most catches the eye – more than the rum’s name itself, which is technically larger, but written in hard-to-read letters that force it to take a back seat. No, clearly the manufacturers want you to see “Cuban” right away.

Vizcaya was indeed once made in Cuba. But then, if I recall my history, some guy with a beard and cigar teamed up with another guy that liked to get his face screen-printed on t-shirts to sell to alternative-type rebel-wannabes, and they both took over Cuba and enacted sanctions against the US to keep their rum and cigars out of the hands of us lousy Americans. Or something like that. Long story short, now Vizcaya is made in the Dominican Republic and wearing Che Guevara shirts is still a great way to tell the world, “I’m so very rebellious.”

Wait a minute – I’m supposed to be reviewing a rum, wasn’t I? Actually, my strangely tangential cynicism isn’t entirely from left-field – it’s just that I have a problem with the pedestal that the word “Cuban” is so often placed upon, especially in regards to rum. I’ve often talked to folks who brag that they’ve tried actual Cuban rum, or have a bottle stashed away somewhere. Those that have tried it usually talk about how there’s nothing else like it, and their eyes sort of glaze over as they attempt to find words to express the sheer nirvana they experienced with every sip. Well you know what? I’ve had Cuban rum too, and it *was* different. So much so, in fact, that it utterly failed to capture the qualities that made me fall in love with rum in the first place. So mystique and taboos aside, Cuban rum, to me, is second-rate at best.

So let’s consider Vizcaya as a rum, without regard for whether it’s genuinely in the Cuban – or any other – fashion. In the glass, Vizcaya is a soft amber; not so dark as to intimidate, and not so light as to appear to lack punch. Just a nice, base amber. To the nose, it bears a slight musk, and definite notes of over-ripe fruit. In my review of a Cuban rum I noted a similar aroma of over-ripe apples, although Vizcaya seems more generally fruity than apple-centric. As is so often the case, Vizcaya tastes much as it smells – musky and fruity. It’s relatively gentle on the tongue, and leaves only a comforting warmth behind, rather than a burn or charred sensation.

While the majority of rums are made from molasses, Vizcaya follows in the tradition of the rhum agrioles in being made from fresh sugar cane juice. Commonly found amongst French rums, this process often results in a vegetal grassiness, but in this case the end product is indeed much more similar to a quality Cuban rum. I say quality because – despite my own preferences for a dark, in your face Jamaican, Barbadian, or Bermudan rum, Vizcaya is definitely an excellent choice for those with a taste for “finer” (meaning land-lubbing peacock) rums.