You may not know this about me, but I like rum. In fact, one could even say I like it a lot. Which is why I was delighted to visit Smuggler’s Cove in San Fransisco this past June while being hosted by some good friends from The Seadogs. The place is definitely set up to be one of those “best kept secret” sort of places, as you could drive past it a hundred times and never know it was there. But once you do enter the door you’ll be greeted with glorious… 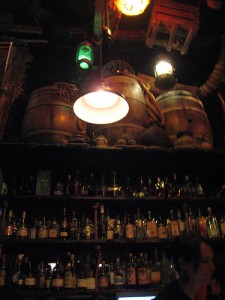 Rum. Sooo much rum! This photo and all the others on this page courtesy of Anna Maria Benincasa.

…darkness. That’s right, it’s dark. VERY dark. The darkitiness of the darkness is so overwhelming that you’ll need a few minutes to adjust before taking a single step. But as your eyes come to terms with the dim surroundings a new world will take shape. A world of giant anchors hanging overhead and flotsam sylishly clinging to the walls. Pufferfish suspend from the ceiling, their bellies aglow with a soft light. And before you a bar comes into view. A bar with shelves… and shelves… and shelves of rum. Beautiful yummy rum.

Smuggler’s Cove indeed has hundreds of rums to try, from the common to the exceedingly rare. But then, I could say the same about my pantry. No, what makes Smuggler’s Cove truly stand out – and makes it a must-visit destination for rum drinkers new and old alike – is the menu of mixed drinks. 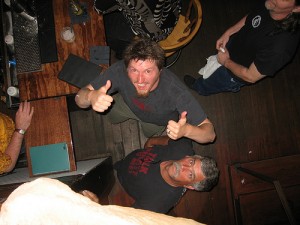 Me (Bilgemunky) and Dan (Dan) getting ready to order another round. Smuggler's Cove is comprised of THREE FREAKIN' LEVELS, hence the bird's eye shot. No, the photographer wasn't flying, despite Dan's bewildered look..

EGADS, you exclaim? Does Bilgemunky now lead you astray, actually recommending you MIX your rums? In this rare case, I certainly do. A brief parusal through the Cove’s menu and one thing is exceedingly clear – these folks pride themselves on their drinks. No, these aren’t froo-froo sissy drinks intended to make your rum taste like Kool-Aid. Rather, these are concoctions designed to enhance, highlight, and compliment the rum’s natural characteristics. Rich, complex drinks, some sweet, some savory. Some are meant to explore rums history, such as Flip, Grog, or Arrack, while others are takes on the golden age of Tiki. And still others are unique creations altogether, allowing you to enjoy rum in ways you likely never imagined. The key here is craftsmanship, and the results are a far cry from some dopey bartender dumping a shot of Malibu into a glass of Hi-C and and telling your it’s a “Tropical Smoochie” or some such nonsense. 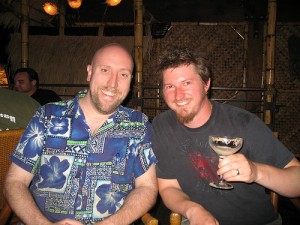 Bilgemunky and Martin Cate, owner of Smuggler's Cove and envy of millions.

So yeah, try the mixed drinks. Try several. But I’d be remiss if I didn’t also encourage you to partake from Smuggler’s Cove’s extensive selection of rums straight up – did I mention that their are hundreds? Cuz there are. If I lived closer, I’d have immediately delved into the rums set before the Rumbustian Society (only sample 200 rums over time to become a Master of the Cove, which I think might come with a cool fez.) But since I’m too far removed to realistically persue such a goal, I instead tried their special Private Reserve which was the perfect conclusion to the evening’s barrage of rum coctails (1. Captain’s Grog 2. Black Prince 3. Painkiller #2 4. Rum Flip and 5. [my fav] Smuggler’s Rum Barrel.)

I need to go back to Smuggler’s Cove right away. Too bad I won’t get another chance until I return to San Fran next June. So I leave it to my readers to keep some barstools warm in my stead 🙂