Seriously, what can I say about NorCal 2010 that doesn’t sound like a repeat of my 2009 After Action Report? I mean, if ever a festival was damn near perfect, NorCal be its name, and this year was every bit as stellar as the years prior – great food, great shopping, great entertainment… 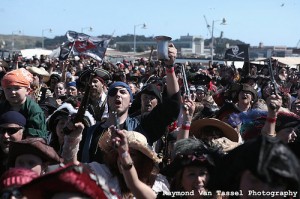 2,600 pirates all shout for more rum to rain from heaven. It didn't happen. Photo by Raymond Van Tassel.

Of course, there were some new elements that set this fourth installment apart from its predecessors – the bid for the Guiness Book of World Records Largest Pirate Gathering not the least of them. Chiming in at an estimated 2,600 pirates, NorCal would appear to have handily beaten the prior recordholders in England (note: the British pirates have already rebound with a claimed 4,000 pirates shortly after, although claims seem dubious based on available photos.) It was certainly a hot enough day for cramming 2,600 pirates together to all yell “arrr” (and other exclamations) for 45 minutes or so, but spirits were high, and folks seemed mighty please to do lend their efforts to such a historic moment.

Entertainment this year consisted of many favorites, including The Pirates Charles, Mister Mac, The Seadogs, Captain Jack Spareribs, and many others. Vendors also consisted largely of “the usual” for NorCal, but bear in mind that “the usual” in this case denotes a lofty standard I’ve rarely seen – pirate goods of the highest quality through and through.

3 out of 4 people have yet to experience the joys of Bilgemunky Radio. We'll leave it to you to guess which is which. Photo by some dude holding Silverwolve's camera.

For me the best part of NorCal this year was meeting up with more readers and listeners – this year seemed particularly packed with folks familiar with Bilgemunky.com and Bilgemunky Radio, and it’s always a treat to find out there are people who actually appreciate these odd services I provide. And yes, there were even some airship pirates in attendance, although I was pleased to note they were largely in keeping with the festival’s pirate theme (moreso than last year, at least.) 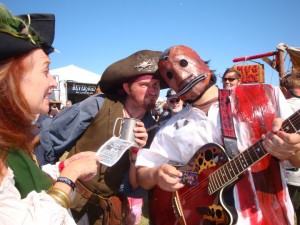 This year included the surprising addition of psycho killers with guitars, who I don't think were actually part of the official lineup. It was odd. Photo by Kendra Guffey.

NorCal is definitely one of the top highlights of my year, and I maintain my hearty recommendation to any potential attendees. Some events are fine for locals, but NorCal is one of those gems worth a long distance journey. It’s on Father’s Day weekend every year, so save the date for 2011 right now!

5 thoughts on “NorCal After Action Report 2010”