As expected, PyrateCon proper began last night, and it did so in true piratey fashion. The evening began quietly enough – something of a calm before the storm as I did some light bar-hopping with Skip and John of Skip Henderson and the Starboard Watch. Skip and John did some light impromptu pirate music at the Funky Pirate, much to the delight of the venue’s drunken patrons who were incredibly generous with their tips, and then we grabbed some quick rum at The Pirate’s Alley Cafe before hitting The Bourbon O – being the site of the PyrateCon kickoff party. We arrived to find things already well underway as the place was swarming with pirates, most of whom had only arrived in town a few hours prior. Music by the Pirates Charles got the night quickly moving, as did the obscene amounts of alcohol.

Morning came all too early for many of us. I arrived on site for my first DJ set to find the stage still under construction. This was unfortunate, but not terribly surprising considering this is the first year that PyrateCon has “taken to the streets”, and the prospect of assembling so much of the event outdoors must surely have brought no end of headaches. I took the delay as an opportunity to scope out the vendor and lecture areas. This year the vendors are split between indoor and outdoor. The outdoor vendors are in tents on Bourbon Street, and have the noted advantage of attracting no end of foot traffic from pirates and “normal” tourists alike. The indoor vendor rooms strike me as rather cramped – hardly appropriate to serve as a hangout area as in past years, and even difficult to manage if you have a sword or excessive plumage. The lecture area, however, is just plain glorious – it’s a proper New Orleans interior patio, and looks far too classy and calm to accommodate pirate speakers 😛

Once the stage was finally completed, the Pirates Charles – remarkably, considering the relatively early hour – started the day off with a smashing show that quickly drew a huge crowd. Whether it’s the uniquely brazen fun of their music, their contagious stage presence, or a combination of both, there is definitely something about the Pirates Charles that easily bridges the gap between pirate enthusiasts and other New Orleans tourists, as the audience was clearly a healthy mix of the two. 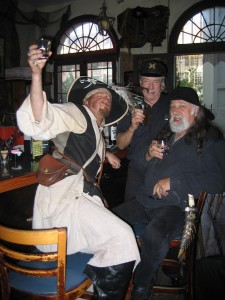 I followed the show with a couple of hours of pirate music to help keep the pirate atmosphere alive between acts. While my contribution was more intended as background, a few passersby found it in their hearts to dance a small jig now and again, or even drop a request or two.

The next live performance was the Sirens of the South, a burlesque troupe that mixes a Victorian sense of the risque with a bit of punk rock. The show consisted for four dancers each doing a unique solo act, ranging from a clockwork doll to an outright pirate diva. As would be expected, pirates and normal folk again had no trouble enjoying this show together.