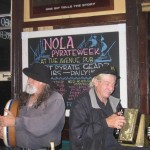 It’s Thursday at last! And whether folks are coming to support PyrateWeek, PyrateCon, neither or both – today is the day that I expect pirates to truly descend upon New Orleans. Not that we haven’t had plenty of scoundrels around town already – last night No Quarter Given held its 15th Anniversary Party at the Avenue Pub, only a short 10 minute street car ride from the French Quarter. The party was packed with pirates and reg’lar folk alike, with performances by Skip Henderson and the Starboard Watch, The Pirates Charles, and the Pirates McKenna.

Aside from hosting the NQG party, The Avenue Pub has also served as the base of operations for PyrateWeek. With piratey drink specials downstairs and pirate vendors upstairs, it’s been a fine destination and hangout for any pirate enthusiasts fortunate enough to stay in New Orleans for such an extended period (PyrateWeek, I believe, is a full 10 days long.) Unlike PyrateCon, which is, let’s face it, about 24-hr partying, PyateWeek has been more diversified, with attendees encouraged to participate in local volunteer reconstruction activities during the day, and then enjoying some quasi-organized pirate pub-crawling at night. Although my flu struggles kept me from participating in any of those activities, I spoke with many that did and heard rave reviews. But with a taste of a few pirate vendors and pirate parties, I think all would agree that PyrateWeek thus far has mostly been a pre-party before the ACTUAL parties this weekend, as tonight is when PyrateWeek, PyrateCon, and rumor has it even some other, third party pirate events really kick it into high gear. 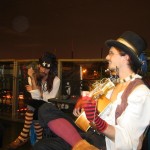 While the NQG Party was a fantastic time, it was my walk back to my condo that demonstrated how fully PyrateCon/PyrateWeek was about to strike – pirates of all ilk had already begun to populate Bourbon Street, and I was properly chided aplenty for turning in at the early hour of 11 p.m. I did, however, make a short stop at the drug store to pick up some cough drops as my throat still hasn’t fully cleared up. I’d completely forgotten that I had two fully functional flintlock pistols strapped to my belt, and so my heart skipped a beat when the security guard approached me. But he just wanted to ask if I knew Captain Morgan. God, I love New Orleans!