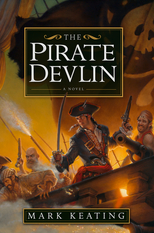 That’s right mates – if’n ya be the literate sort, then here’s your chance to be the first on your block to read The Pirate Devlin, being the new pirate novel from Mark Keating:

In THE PIRATE DEVLIN, Mark Keating delivers a gripping adventure novel in which a servant captured by pirates becomes their captain and finds himself searching for a king’s fortune–on a course set to pit him against his former master, a man now sworn to kill him. Fans of Patrick O’Brien and C.S. Forrester will be swept up in the high seas battles, chases, and trickery. Keating’s debut brings all the excitement and fury of the 18th-century’s golden age of piracy.

So how do you win, you ask? Two things you have to do – first, respond to this post in the comments by telling us all the first thing you’d buy if YOU had a king’s fortune at hand. And no, responding on Facebook or Twitter doesn’t count – you have to respond right here at Bilgemunky.com. Do so by Monday August 9th, 2010, because that evening I’ll draw two winners from the entries and read them out on Bilgemunky Radio. I will NOT announce the winners here – you gotta listen to Bilgemunky Radio episode 138, either live on Monday, or via podcast if you want to know if you’re the winner. I’ll give you a week to get your act together, at which point if you haven’t claimed your prize I’ll just give it to Doglock Hawk, who’s been practicin’ his letters something fierce this year and hopes to learn to read real good.

24 thoughts on “Summer Reading: Win a Copy of “The Pirate Devlin””