I’m delighted to say that The Voyages of She Buccaneer is a comic that successfully dodges the above scenario. True, our heroine is quite the fetching lass with an ultra-healthy chest that constantly threatens to burst free of its scanty pirate-flag inspired captor, but the writers of the series wisely depend on sex-appeal far less than you might expect. Instead, The Voyages of She Buccaneer focus primarily on pirate action, exotic locals, and more than a little mysterious – if historically unlikely (though no more so than She Buccaneer’s attire) – supernatural elements. The artwork is attractive and vibrantly colored, and the content is surprisingly substantive, with a full mini-adventure per issue (commendable in these days when comics seem to be getting shorter and shorter.) END_OF_DOCUMENT_TOKEN_TO_BE_REPLACED 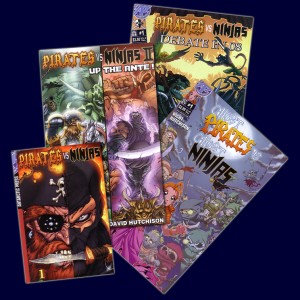 It seems that it’s been a thousand years since pirates and ninjas first took to bickering, so it was only a matter of time before someone decided to make a comic book out of it. But don’t expect any solid answers regarding which side is superior from Pirates vs. Ninjas – much like the Freddy vs. Jason film, to draw such a conclusion would not only end the series, but certainly alienate half the audience (assuming ninjas made up anything close to half the audience, which naturally they don’t but we’ll be diplomatic.) END_OF_DOCUMENT_TOKEN_TO_BE_REPLACED