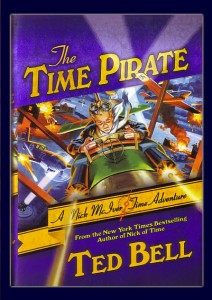 And no one does this better than Ted Bell, author of Nick of Time, and now its sequel The Time Pirate. Set in the early days of World War 2, Nick and his family reside on a strategically important island in the English Channel, which soon finds itself overrun by Nazi invaders. Nick, who was already established in the first novel to be a boy of admirable patriotism, daring, and creativity, does his best to defend his homeland, even going so far as to restore (and fly) his father’s WWI airplane and engaging in home-made bomb runs over a Nazi base-camp. END_OF_DOCUMENT_TOKEN_TO_BE_REPLACED