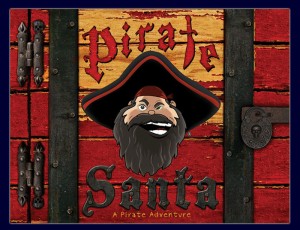 Much like Jack Skellington before them, the inventors of Talk Like a Pirate Day have set their sights on the Yule-tide season in their quest for total holiday domination. Does it all end in comical disaster as did Nightmare Before Christmas, or are the Pirate Guys savvy enough commandeer the king of all holidays? END_OF_DOCUMENT_TOKEN_TO_BE_REPLACED 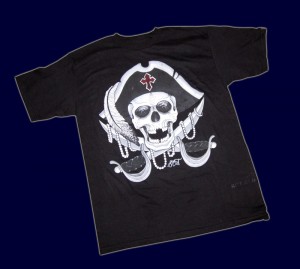 Sweet, check out what my mates at Studio City Tattoo have been up to! SCT Clothing is a new line of t-shirts featuring tattoo-inspired artwork of varying pirate persuasion. Pictured here is the gorgeous Jolly Roger, which is a gloriously sinister skull flanked by crossed cutlasses and pearls – loosely based, I believe, on Studio City Tattoo’s own logo. Check out their website for more – Pearl Diver may well be another pirate favorite, while those wishing to attire themselves beyond the limits of strict piracy might enjoy the likes of Evil Spider or Unicorpse.

Oh, and any Bilgemunky.com readers who mention this website when purchasing their shirt in-store will get a FREE Studio City Tattoo Doubloon, made from real copper and good for $5 off your next tattoo (while supplies last, offer not good for online shirt purchases nor online tattoos.) 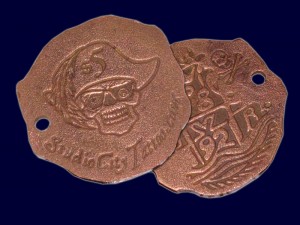 That the above paragraph describes a ring is astounding, but true. Studio City Tattoo – California’s #1 piratey tattoo shop – has long sported their own distinctive Jolly Roger by way of a logo. And Skinny Dog Designs – the very artisans that created many of the Pirates of the Caribbean rings and pendants available at the PotC Rides in the Disney Theme Parks – have brilliantly crafted this logo into a ring that is practically a pirate novel in itself. END_OF_DOCUMENT_TOKEN_TO_BE_REPLACED