Whoa, momma! Many sources call this the “Cognac of Rums.” Now, I don’t know much about cognac, but I know a little about rum. And THIS is rum! Made by a family of Cuban exiles in the Dominican Republic, this 15 year old rum is not for the squeamish. This rum tastes like rum, and it has bite. If you’re not ready for it, you might lose an eye (and then you could wear a patch, which would be awsome!) Probably the best and truest rum I’ve tasted since Blackbeard’s Reserve (the 25 year, not that cursed 26 rotgut.) Additionally, this may well be the closest you can legally get to a true Cuban rum, which makes it even more worthwhile. Put it on your shopping list.

The writers of Scurvy Dogs claim time and time again that “pirates are the new monkeys.” I must confess that I only half understand that statement, but deep in my heart I still know it’s true. Similar could be said of their comic book, as I can’t fully understand how the same batch of comically stereotyped pirates (led by Blackbeard himself) can fight both Portuguese Lepers and Vikings from the future while still finding time to work in highrise offices and chase after tankers full of Tang. Nope, I don’t get it – but this comic is so funny it doesn’t really matter. Whether our pirates are picking fights with monkeys in a martini bar or plotting mutiny from their cubicles, this comic is a demented taste of Pirate Heaven. END_OF_DOCUMENT_TOKEN_TO_BE_REPLACED

Remember the movie Pirates of the Caribbean? Remember that pirate in Jack’s crew (the one who wasn’t Cotton, wasn’t the dwarf or the guy with the flask, and wasn’t the cute chick, Anamaria.) Yeah, that pirate. No? Me neither. He was probably very cool and piratey looking, but with so many colorful characters floating around, he just didn’t manage to leave a mark on my memory. Well, that’s how I feel about Monte Cristo rum. It’s good, tastes like rum, even has a reasonably satisfying tingle as it goes down my throat. But try as I might, I can’t find a single thing about it that makes it distinctive from other rums – nothing to make me want to rush out and get another bottle.

And that makes me sad.

This isn’t a rare rum. It isn’t expensive. Which is precisely why it deserves a glowing review. This has become my staple rum. I’m no longer a big rum & coke drinker, and many of your grocery store level “real” rums have fallen flat to me. But Appleton V/X is a fine deal – rummy but not too harsh. It gives the illusion of possessing depth while remaining shallow enough that you need not think too much. The perfect rum for a tired pirate doing late night web work or playing Yohoho! Puzzle Pirates – which is exactly what I use it for.

Internet Wine and Spirits says this rum has an “unctuous big finish.” What the hell does that mean? 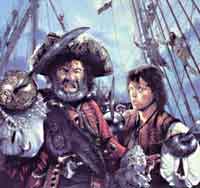 So let me set the record straight – this is an absolutely gorgeous, terribly fantastic movie. The costumes are phenominal, as are the sets, the acting, and the writing. The story itself revolves around Captain Redd, a down-on-his-luck pirate adrift on a raft with his first mate, the Frog. Vulgar, crude, greedy, and scheming, Captain Redd is a walking cliché who shows us why the cliché became a cliché in the first place, capable of shouting such catchphrases as “me hearties” and “by thunder” with ease and gusto. Rescued by the Spanish Galleon, Neptune, Redd and Frog soon grow weary of the ill-treatment they’re forced to endure at the hands of the ship’s First Officer, Don Alfonso. A pompous peacock of a man, Don Alfonso soon suffers a humiliating defeat when Captain Redd convinces the crew to mutiny and turn to a life of piracy. Control of the ship then changes hands a few more times throughout the Caribbean as Captain Redd and Don Alfonso repeatedly butt heads and take it in turns to reseize the Neptune and, more importanly, its precious cargo of a golden Aztec throne. END_OF_DOCUMENT_TOKEN_TO_BE_REPLACED 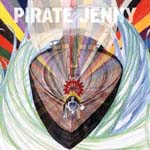 I heard Never Sea Land first. It’s how I was introduced to Pirate Jenny, and how I fell in love with them. So by default, Never Sea Land is my favorite. Were it not for that edge, I might argue that Once Upon a Wave is the slightly better album. Or I might not – I’m really indecisive on this one. In Never Sea Land I was briefly introduced to the character Captain Slaymore. In Once Upon a Wave he returns along with Scabby the seaman. This was when it becomes apparent there is actually a story at works. Scamalot, pirate paradise, is in a state of transition. Its walls are in peril and a new king must rise. Of course, it’s not as straightforward as that, but its close enough. END_OF_DOCUMENT_TOKEN_TO_BE_REPLACED

What can I say about this album? It’s unfair of me to review it, I’m too biased.

I don’t know about you, but I grew up with sea shanties. Schooner Fare and its ilk were what I listened to as a teenager (which is probably why I didn’t get invited to the cool parties.) But in time I needed something different. Enter Pirate Jenny. END_OF_DOCUMENT_TOKEN_TO_BE_REPLACED 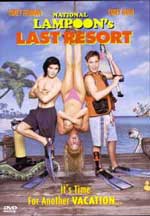 From the creators of Family Vacation comes this movie with a rather unique premise: Two teenage slackers, having gotten fired after blowing up the burger joint they worked at, land a couple of scuba instructor jobs at a swanky resort by pretending to be former Navy seals. The resort is owned by their uncle, a has-been Hollywood star who’s constantly trying to relive his glory days as a pirate captain on the silver screen as he wanders his island in full pirate garb whilst seeking buried treasure. Of course, the real action starts when these…

Oh jeez – I just realized you might be starting to think this sounds like a decent movie. My bad. Did I mention that they didn’t have enough actors, so many of the extras are played by cardboard cutouts? Or how about the fact that the underwater scenes are shot in a room painted blue with someone just offscreen blowing bubbles? And don’t overlook the fact that this little gem stars Corey Haim and Corey Feldman. This is a bizarre flick, and while it seems to try to poke fun at its own absurdity, it doesn’t do so nearly enough to be forgiven. But it does make lots of pirate references, so watch it if you must – I won’t hold it against you. Just don’t say you weren’t warned.