Who says you need to watch something before making a preview/parody of it? Let me set the stage – these guys made an animation based on Tales of Monkey Island Episode 1: Launch of the Screaming Narwhal. THEN they played it. And then they made an animation of the next chapter, and THEN watched that chapter. And so on. Pretty genius if you ask me.

Chapter 1: Launch of the Screaming Narwhal

END_OF_DOCUMENT_TOKEN_TO_BE_REPLACED

I just finished reading Vampirates by Justin Somper, so it was funny timing to stumble across this interview:

Why I love my Vampirates | The Sun

Enjoy the article, and read the book – just don’t get all wrapped up in becoming a vampirate someday, as it’s not all it’s cracked up to be. When they talk about drinking Nelson’s Blood, it’s *not* a euphemism for rum. Can you even imagine such a thing??? Also, blood stains don’t wash from your frock nearly as readily as does rum, so there’s that as well.

So listen up, posers, cuz the ante has just been upped! Sailing in their very own vessel (christened “Your Mom”) the four lads of The Pirates Life have quite literally extracted themselves from any semblance of normal life in favor of high seas adventure. Their goal is to circumnavigate the globe, although the funding is what I’m still not too clear on. If they intend to pillage as they travel, they might want to work on their intimidation skills, as the below video doesn’t exactly compel me to quake in my boots. It’s fun, though 🙂

Not one, but TWO new songs tonight – both Bilgemunky Radio exclusives! The Brethren of Leviathan comes at us from Willoughby Caught, while Thyme Awaye shares Pearl of the Sea.

Arrr!!! Longtime Bilgemunky Radio listener, Dman, has made his own Kraken Rum commercial. Don’t blink or you might miss some of it – it’s a whirlwind, no doubt. But the point is clear – Don’t touch the Kraken!

What fun we had. What dreadful, sinful fun. And I only coughed a little bit. Cripes, how much rum do I have to drink to finally kill this cough???? END_OF_DOCUMENT_TOKEN_TO_BE_REPLACED

So the second weekend of March, 2010 saw me at the Fell’s Point Privateer Day in Baltimore, MD. This was my first year attending this event, although I’d certainly heard good things. I was, however, a little concerned that a Privateer “Day” might not quite be robust enough to justify a long distance journey. Thanks in large part to Pirates Magazine and the Devil’s Dozen Induction, I needn’t have worried. END_OF_DOCUMENT_TOKEN_TO_BE_REPLACED

Did I post this yet? I meant to, but then I might have had some rum. And then all bets are off – you know how it is. Enjoy the trailer, as it has everything. Choreographed swordfights, amusingly bad fake snakemonsters, and BLUWAWAWAWA!!! 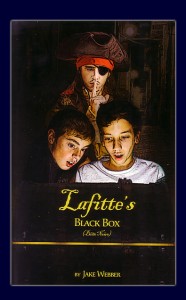 When I started reviewing pirate books, I never would have guessed that I’d so often also be reviewing time-travel books. I suppose it makes sense, as piracy – the swashbuckling, romantic sort, anyways – has long gone the way of the dodo, and time-travel would seem an obvious method of connecting the modern protaganist with a true buccaneer adventure. Also, never would I have guessed all the different methods of time travel I’d discover – antique contraptions, offshore wormholes, time-stretching caverns… and now, sleep. With so many methods of time travel available to us, it’s really a wonder that real-world quantum physisists are having so much trouble pinning it down. Maybe they just don’t read enough pirate books. END_OF_DOCUMENT_TOKEN_TO_BE_REPLACED

So a while back I learned about an upcoming line of toys being produced based on Pirates 2: Stagnetti’s Revenge. Shucks, I was excited as I envisioned my very own Captain Reynolds action figure bravely combating the evil Stagnetti, while the mighty Jules attempts to thwart Xifeng’s efforts to make zombies or something. Ah, such times we would have.

Well, guess what? The toys are now released, and they’re not quite what I’d envisioned. It seems that “adult” toys sometimes don’t mean action figures for grownups, but rather something quite different. To get an idea of what I’m talking about, check out this picture, but don’t click it if you shouldn’t (that means you, kiddies!)

There’s more – you can view them for yourselves at fine adult establishments everywhere. Adam&Eve, for example, has a wide selection of piratey naughty toys, just run a search for “pirate.”