I’ve mentioned this once already, but at that time there wasn’t a cool video:

Seriously, I want to see Blackbeard rappel down this building, but that only happens if he first raises $1,000 for the Special Olympics. So donate today – he’s more than a quarter of the way there already!

Oh, and if you read the details, this is a flat donation, and NOT a pledged donation per floors of the building rappelled – there’s been some confusion on this matter 😛

Talk Like a Pirate Day Weekend is upon us, and I’m on my way to DJ (and more) at BrethrenCon in Denver Colorado! Don’t think Denver can hold its own as a bastion of pirate glory just because it’s, like, totally landlocked? I’d remind you that whereever there’s rum, pirates, and rockin’ pirate music, there’s a party! Hope to see lots of you there!!!

Is this piratey? Probably not. But it’s an ancient sea god promoting Old Spice, so I think we’ll give it a free pass.

With pirate excitement brewing again, the news is fairly saturated with Pirates of the Caribbean news. I mean, every grainy photo of the back of Jack Sparrow taken from 400 yards away becomes headline-worthy. But this has got to be the best headline ever, from Disney Dreaming:

“Pirates Of The Caribbean: On Stranger Tides” Is Still Filming

Yup. PotC. Still filming, yo. Not in theaters yet. Nope. Still a… work in progress, as it were. And just to prove it, Jerry Bruckheimer posted a picture of a bunch of people on the beach, presumably doing film-related stuff. Busy, busy, busy. Try not to wet yourself in excitement.

Talk Like a Pirate Day fast approaches, and Bilgemunky Radio celebrates with rum, pirate music, and rum. New tunes from Eliza Jaye and the Tarts, plus an old favorite returns! END_OF_DOCUMENT_TOKEN_TO_BE_REPLACED

Now here’s a new way to celebrate TLAPD in style – adopt a pet! If you’re near the Chicago area on September 19th, the South Suburban Humane Society is celebrating Talk Like a Pirate Day with an adoption event called Find Yer Matey Day! Anyone going to the shelter on that day to find their matey, dressed as, or talking like a pirate can get 50% off the adoption fee of any animal they want.

Oh, and while we’re on the subject, Cap’n Slappy himself has some pet-related advice he’d like to share:

Cobra: The Space Pirate is coming to the big screen. Excited? Me neither. Nothing against it, but the only Cobras I know either battle mongooses or duke it out with GI Joe. Cobra the Space Pirate? New to me.

So Alexandre Aja, the force behind Piranha 3D, is planning on tackling this project. Apparently he’s a huge fan of Cobra, and has been for many years. Apparently lots of people are.

So maybe this is great news. Maybe in a couple of years we’ll all be like, Cobra this and Cobra that. If so, then you heard it here first and Bilgemunky.com has once again proved that it’s a viable news source (despite what Google may think.) 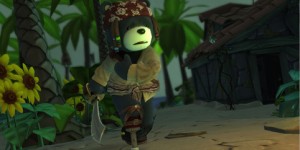 Unfortunately for the Guyana Health Minister, songs like “Please Drink in Moderation” and “How About Some Water?” have never taken off as well as the many pro-rum-guzzling songs:

The Associated Press: Guyana minister: Rum may be fun, but dont glorify