From their new album “No Stars” comes this music video of the song “Captain Flint” (see a pattern here?) It’s only a guess, but I’m going to assume that the young pirate starring in this video is the offspring of one or more of the band members. Hey, if Will Smith can do it, why not Ben Gunn?

Dark, creepy silhouette puppets singing about death – and it even stars Murray, the talking skull (I assume that’s him, anyways!)

A touch of the piratey odd tonight, with the likes of Jollyship the Whiz Bang, Mizzen, Momus, and so much more.

Man Knowledge: A Pirate Primer | The Art of Manliness

Hrmmmm… “The Art of Manliness” and Pirates? But I thought that site was all about shaving and good manners – not exactly staples amongst the pirate community 😛

It’s the time of year again when we all vote for the Best Pirate Ever at Seabeaver! Last year’s winner was Blackbeard – this year I’m gunning for the dark horse LeChuck! 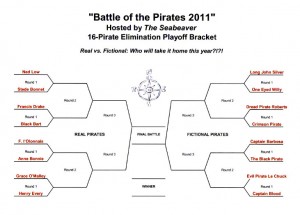 Vote for your favorite to see them face off against Blackbeard at the end of the battle! If your favorite isn’t in the running don’t be sad, it just means you like lame pirates.

OK, I guess you can be a little sad.

When Irish eyes are smilin’ then all the beer must be drained. But that’s ok, cuz there’s still plenty whiskey and rum!

Usually when I find a story about a stupid criminal doing something stupid for/while-drunk-on rum, it invariably involves Bacardi. But this time it seems Captain Morgan (and Captain Morgan Private Stock) served as this master criminal’s boozy muse:

So, do we respect him more or less? Private Stock isn’t exactly top shelf, but depending on the bar it might have been the best available. Perhaps we have a connoisseur on our hands?

Captain Morgan Spiced Rum isn’t exactly top shelf. But, they don’t really claim to be, either. They actually seem pretty comfortable in their skin as a staple frat-party mixer rum, and for that I respect them. Fun commercials now and then as well. And now this:

That’s right – as a reward for finding the historical Morgan’s ship, Captain Morgan Rum is giving each expedition member a BARREL of their OWN BLEND of rum.

Crikes, that’s an incredibly sweet reward – and PLUS they’re offering a bonus to the first diver to recover a bottle of actual “Captain Morgan’s” rum (meaning that which at one point belonged to the man himself.) Whoever knew that hunting for sunken pirate treasure could be so lucrative?