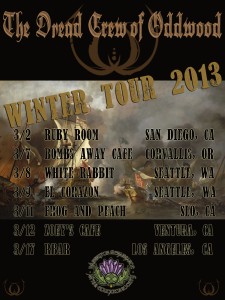 Looks like we’re all in for some relief from the winter doldrums. Wait, did I say “all”? Scratch that – just the lucky bastids on the west coast – the rest of us will continue to enjoy our weekly “blizzard of the centuries.”

I haven’t seen Dread Crew perform in several years, but as I recall they were FACEMELTINGLY AWESOME! So, yeah… catch a show if you can.

For more info on Dreadcrew, I bet their website is all sorts of useful. It’s www.thedreadcrewofoddwood.com. Buy some of their genius albums while you’re at it – they’ll rock your stripey socks right off and then scrape the barnacles from your gums like a sonic laser of pirattitude.

I’ll be honest, mates – numbers and figures make my head hurt. But take a gander at Cap’n Jimbo’s writeup about massive rum subsidies that provide an unfair competitive advantage to three huge rum producers at the expense of the little guys and I think you’ll agree it looks a right mess. An excerpt:

Then things got much, much worse when the USVI instituted a “rum war” against Puerto Rico last year. What happened is almost unthinkable. The USVI gave Diageo nearly $3 Billion – not million, billion! – in subsidies. These subsidies were so rich that they amount to more than double the cost of actually producing rum! Diageo is actually being paid to produce rum. The USVI also gifted Fortune Brands (Cruzan) $1 Billion, yes billion – for all manner of free improvements and facilities, including a guarantee that Cruzan can buy molasses for just 16 cents/gallon – far under the market price of $2.00/gallon that the Caribbean producers must pay.

The risk is that we lose the small rums we all love, and are left with naught but a few mega-rums, one of which is Bacardi of all things (crikey, I might have to go back to drinking water instead.)

You can read the full article over at CanadianWhisky.org, and then consider signing the petition. But whats more, keep buying your favorite rums, mates – they need our support, now and always!

The original Rogue’s Gallery was more mediocre than good, but it did have a few gems. A sequel all these years later? Normally I’d suggest that ship has sailed (hah!) but there are a few in the lineup that interest me. Iggy Pop in particular would seem well suited to the task of crusty sailor songs. And Courtney Love? Yeah, she could have been right at home in a seedy dockside bar, I’d wager.

Don’t get me wrong; there’s every chance this album will be wretch. BUT… maybe not 🙂

Thanks to Jason Lang for bringing this one to my attention! 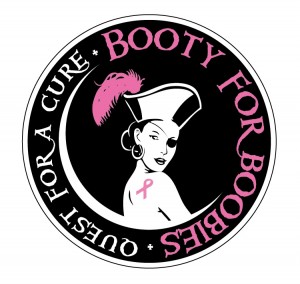 A pirate party dedicated to the fight against breast cancer? Sounds like the purpose opportunity to engage is some good-natured villainy to me! From their website:

Booty for Boobies is a crew of breast avengers raising treasure for the chests. We host an annual Pirate Party that is focused on the task of raising money that is contributed directly to Breast Cancer Research. Through the generous donation of sponsors we are able to give 100% of the door proceeds at our event to the American Cancer Society in support of their Breast Cancer programs.

It’s been one hell of a summer – plenty of heat to make the rum all the sweeter, and a couple of pirate festivals thrown in for good measure.

This past May I put Bilgemunky Radio on a summer hiatus. The reasons for this were twofold. First off, I was having hardware issues that made it increasingly difficult to broadcast a quality show. Taking the summer off gave me the time I needed to evaluate the situation and consider possible solutions. END_OF_DOCUMENT_TOKEN_TO_BE_REPLACED

Will Michael Bay’s “Treasure Island” Prequel Prove to Be Pirate Heaven or a Rum Do?

Wait, nevermind – it’s a Treasure Island thing. I guess any cannonball headbutting will be done by Long John, who will probably sport a crutch that can do singleshot, full auto, or burst.

Clearly loads of pirate TV “in the works” based on this article – some of it we’ve heard before, some new. Now let’s see what actually finds a way to the tiny screen.

I’m a sucker for great ads, and Captain Morgan continues to rock my world. Love this new commercial for Captain Morgan Black – looks like their “trilogy” of genius piratey TV spots has more steam left after all!

Check it out – one minute of family squabbling followed by two minutes of swordplay. Love the scenery and music. Don’t love the continued trend of dreadfully unimaginative female pirate characters. Love how an NPC can cut you directly in the chest with a loud sound of sliced meat and you just shrug it off, which is exactly how it goes when I fight in real life 😀

Pirates like to talk tough, but sometimes you might wonder if we actually have the nerve to wield our stainless steel made-in-Taiwan swords when push comes to shove. Well, this would-be burglar just learned the answer the hard way:

Thanks to Captain Killy of St. Croix for bringing this one to my attention.

Risen 2, it be on its way, and we have the video to prove it. I don’t love that the female lead looks like a freshly-washed Jack Sparrow wannabe, but in most other respects I’d say this looks pretty slick. Looking forward to checking it out firsthand!