The U.S. is full of great pirate festivals, large and small. But there are a very few locations that can nearly claim to have been doing piracy since the Golden Age itself – Key West and Gasparilla come time mind, and St. Augustine does as well. Being the oldest city in the country, and certainly well located to have seen its fair share of piracy, I’d always been under the impression that the St. Augustine Pirate Gathering was one of the “old guard” – but in this I was quite mistaken. The Gathering is in fact only in its fourth year, although thanks to a fine, piratey location, plenty of local flair, and the strong support of nearby crews and piratey businesses, it’s nonetheless a festival in full stride. 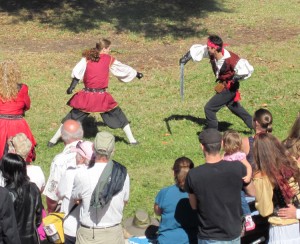 Saturday morning concluded with a parade and pirate battle. This is a shot of Team Edward facing off against Team Jacob. It was messy.

While the St. Augustine Pirate Gathering is itself a two day festival held in a park just off-side from the historic district, things began semi-officially on Friday evening with a pub crawl through the taverns of the Spanish Quarter. I arrived just in time, but neglected to grab my camera and therefore don’t have pictures of the hordes of pirate-garbed crawlers. It’s a shame, too, because the sheer mass of pirates defies words, and indeed seemed to go on forever – a couple of hundred scoundrels, I would venture. I tagged along to the first bar, which was woefully unprepared for such an influx of pirates, although they did their level best. So too did the bar’s distinctly non-pirate singer, who made every effort to start throwing some “yarrrs” into his songs, much to the delight of his new, heavily armed audience. It was shaping up to be a fine start to the weekend, but being as I’d only just arrived I opted to cut my own participation short and call it a night.

Saturday morning saw the festival grounds fully decorated, and vendors making their last minute preparations. As the Festival DJ, I was stationed near the entrance so as to keep the pirate tunes flowing throughout the day. I did, however, manage to sneak away now and then (otherwise, how could I talk about the festival, eh?) The grounds were primarily taken up by vendors. A few were friends I’ve known from other festivals – No Quarter Given was there, promoting their new book The Book of Pirates. Tiger Lee of Hot Pirate Babes and Pirate Fashions N Fotos was selling garb and calendars, along with his lovely associate Caribbean Pearl. And then we had Robin St. Graves of “Acts of Piracy” selling his own swords, belt buckles, and other piratey bronzework. There were also many other vendors, with goods ranging from tropical signage to pirate and colonial miscellany (telescopes, keys, dining ware, etc.) The shopping was actually quite decent, and whether you were looking to get a start on a properly historical pirate ensemble, or to acquire a new leather cat-o-nine tails, there was plenty to choose from. 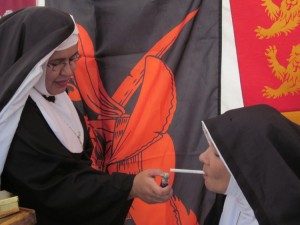 Before you criticize these nuns for smoking cigarettes, bear in mind it's only because they'd run out of cigars.

The far end of the festival held the beer tent, with entertainment throughout the day by The Brigands, Rusty Cutlass, and Nun for the Road (that’s right, a comedy group of singing nuns.) Nuns don’t often come to mind when I think of likely pirate entertainment, but in a town with such strong Spanish-Catholic roots as St. Augustine they seemed remarkably appropriate. The beer tent was also the location of the festival’s costume contests, raffles, and other goings on. However, entertainment could also be found elsewhere on the grounds, with Faire Wynds wowing the crowd with everything from magic to “singing” wine glasses, and For Love or Money bringing their sea music to any and every corner of the festival now and again. There were also performers from Pirates Dinner Adventure, who not only brought their skills at entertaining crowds, but also their own mobile pirate ship (actually, several folks brought their own ships to this festival. Why don’t *I* have a pirate ship on wheels to take with me? Oh yeah, I’m in Wisconsin :P) And I’d be remiss if I didn’t also mention the festival’s “surprise” entertainer, Skip Henderson, who popped in unexpectedly, ready to share his classic sea shanties everywhere from the No Quarter Given booth to my own DJ booth – definitely an unexpected treat.

The crew from Pirates Dinner Adventure strut their stuff from the deck of their mobile pirate ship. Yeah, most ships are mobile, but this one travels on land. Like a land boat. Yar.

Saturday’s crowds started slowly, but quickly picked up numbers as noon rolled around, and the festival spent the better part of the day truly bustling. Saturday evening, however, saw the public depart and make way for the Buccaneer’s Bash, thus allowing us pirates to be amongst our own. Dinner was catered, and although some last-minute difficulties saw it be a little later than expected, the meal of pork, corn, and potatoes seemed quite appropriate for a bunch of hungry pirates. Entertainment was again provided by The Brigands, who were finally able to let loose some of their ‘A’ material (meaning not family appropriate), along with Nun For the Road. Also in attendance was the St. Augustine Royal Family who, as I understand it, can indeed trace their roots to Spanish nobility. They were scheduled to give out Letters of Marque that night, but I somehow missed this part of the festivities – maybe I was too deep in my cups at that point, or maybe it happened before I arrived. Either way, I missed it, and therefore can assure my dear readers that I have NOT been granted a letter of Marque, and am indeed still a free and independent pirate 🙂

The Bash concluded with more music from the Brigands, and some increasingly raucous dancing amongst the brethren. At the Bash’s conclusion, several of us swung by Tiger Lee’s Pirate Fashons Shop/Studio for a quick tour (a definite MUST SEE if you’re in the area), and then on to the pirate encampment a short walk away where the debauchery continued ’til the wee hours. 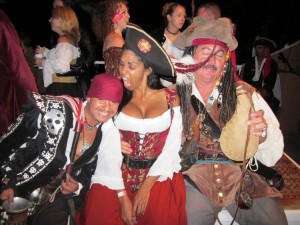 There was plenty to drink aboard the Black Raven, but not much to eat. Caribbean Pearl remembered her zombie training though and feasted on Spike's BRAINS.

Sunday the festival began much like Saturday had, albeit with most pirates boasting a little less spring in their step. The sunny weather and fresh-faced patrons soon wiped away any option of napping the day away, though, and before long things were again in full swing. Sunday afternoon things wound down, with several of the vendors packing up a bit earlier than would seem proper, getting ready to bug out at the festival’s conclusion. However, thanks to Captain Mayhem of The Black Raven, hardcore pirate enthusiasts had the chance to make one last go of things with an evening pirate cruise. Mayhem, Blackbeard and company played host to the mostly pirate audience (with a few civilians who seemed unsure of being so wildly outnumbered), entertaining us with magic, jokes, songs, and frequent encouragement to visit the bar. It was an excellent way to conclude the weekend, and if they make the cruise an annual event I’d highly encourage any and all pirates to join in.

The St. Augustine Pirate Gathering definitely has a good thing going. They have incredibly support from local pirates, a great location, and some fine entertainment. I had a great time DJing the entrance, which was the first time I’d been used in such an ongoing, “background” sort of capacity, but thanks to frequent visitors from listeners the days really flew by. And the evenings – well, those are the parts of any festival that make it truly worthwhile for the diehard pirates, and the Gathering provided three very memorable evenings all in a row!