I just returned from the St. Louis Pirate Festival – my third year in attendance (and being as it’s their third year having the festival, I’d call that a pretty good track record on my part.) 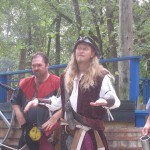 The St. Louis Pirate Festival is held on the same grounds as the St. Louis Renaissance Festival – wooden paths checkered with nooks, cranies, and permenant buildings for vendors of food, beer, and wares. Vendors this year were decent, although there seemed to be a smidge fewer than in the past. The Pyrate Trading Company was amongst the highlights for me – not only because they’re such good mates of mine, but because they still make some of the finest hats and leather goods around. Even my father-in-law, who attended the festival with me, found himself a hat to call his very own.

Entertainment included festival veterans The Scallywaggs, 3 Pints Gone, Thom Bedlam, The Chuvani Bellydancers, and many others. Some of the former musical acts were sadly missing, though, including the Bucklers of Swash, Limey Birds, and Bounding Main. However, for the first time ever this festival hosted The Musical Blades, which was a great treat being as I’ve been a fan for years, yet never able to meet them or catch a live show. 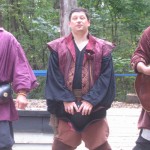 Panama, of the Musical Blades, seemed oddly protective of his privates throughout the weekend.

Also a treat was meeting the Bilgemunky.com and Bilgemunky Radio fans. One bloke truly made my day by yelling out during the end of a Musical Blades performance that he heard them on Bilgemunky Radio. Other listeners gave me rum (yay!), one bowed to me (always a classy move), and a third I almost ran away from, being as he was dressed in Air Force fatigues and looked quite serious. Happily it turned out that he wasn’t looking to arrest me, but merely he and his daugher wished to meet “the Bilgemunky”, but had been held up most of the day with other military-type duties until the last minute. Thanks to all of you – it’s always great to meet listeners/readers. I just hope I didn’t seem too much a spaz, as I’m still unaccustomed to it all 🙂

Sadly, the weekend’s greatest disappointment was the crowd – I mean, where was everyone? Ok, granted, the weather predictions were pretty foul, but Saturday turned out to be quite decent, yet the crowds were awfully sparce. Sunday, well, the remnants of Hurricane Ike saw fit to crash the party and flood the festival, so I guess no one can be blamed for not attending that day (especially being as it was cancelled.) The good news, however, is there are still two more weeks. Sadly I can’t return myself, but if you’re even remotely in the area I heartily recommend checking it out. 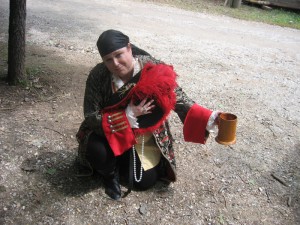 Due tribute and courtesy to the Bilgemunky is always a smart move.