First shots are starting to pop up around the internet from the filming of Pirates of the Caribbean: On Stranger Tides. Some of these shots are of Johnny Depp… on a beach… dressed like Jack Sparrow. Is that newsworthy? I didn’t think so either.

BUT, we also now have some shots of Blackbeard’s Ship, the Queen Anne’s Revenge. And I’ll be honest, it’s good to see a “real” pirate ship after two films of The Flying Dutchman and it’s ghostly “I just made out with a sea slug” look. So check it out: 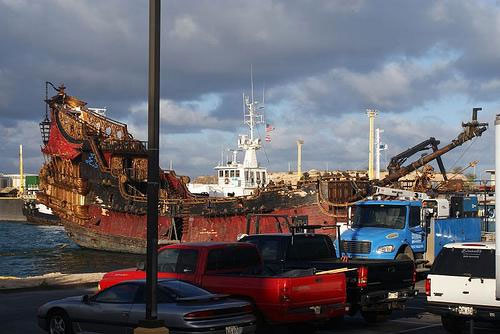 Although there’s surely no historical evidence to back it up, the devil-skeleton figurehead is a fine touch as it nicely captures the tone of Blackbeard’s famous flag. What, you can’t see it in the above shot? Quit complaining and just click the link below for more.

8 thoughts on “First Shots of BlackBeard’s Ship for PotC4”