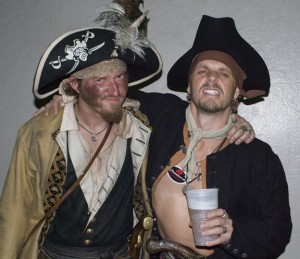 Unlike previous after-action reports, I don’t need to provide you with full details as to how PyrateCon and PyrateWeek went – you can read about them on my earlier posts from onsite. But, it does seem worthwhile to offer a few final thoughts. Both events have enjoyed (meaning suffered) their share of political BS – some of it perhaps justified, some of it perhaps less so. For me – and I imagine for most readers – none of it adds up to squat. All that matters to me as an attendee is whether these events are worth my time and money to attend. That’s not to say wronged parties shouldn’t seek justice, just that it’s not my concern to sort it all out.

Let’s start with PyrateCon. Perhaps the most drastic shift from previous years was its format. Year one, for all its faults, was a clear convention through and through – goodie bags for attendees, exclusive events (most notably a pre-screening of Pirates of the Great Salt Lake), quality VIPs (The Pirate Guys, ER Nelson, George Choundas, 2nd tier PotC actors, etc), and a wide assortment of pirate vendors in a semi-private setting created a truly unique – and wonderful – experience. Year two followed much in this same format, but year three – this year – was a stark departure. VIPs were essentially nonexistent (I consider this a mixed blessing, as they did add some interest, although I admit to worrying at how long our community would treat every PotC extra or Pirate Master contestant as a “VIP”), seminars were sparse and held little universal appeal, and the smaller (and cramped) assortment of vendors carried loads of great staple items but little that a seasoned pirate veteran wouldn’t have already seen a thousand times before. Basically, this was now a pirate street festival catering as much to the general public as to the pirates. Now bear in mind, this is an observation ratehr than a direct criticism. Although I miss the convention format, I’ll quickly concede that the street festival may well have more commercial merit, and therefore could be a necessity for PyrateCon to carry forward. But it does make one wonder just why it’s worth paying an admission fee to attend – and this, I’m happy to say, has already been addressed.

After PyrateCon 2008, many folks began to speculate that actually paying to “attend” PyrateCon was unnecessary, and that simply showing up in New Orleans dressed as a pirate was more than enough to enjoy the highlights. This year, I believe, many attendees tried exactly this, and were likely none the worse for it. While I applaud PyrateCon’s efforts to make their wristbands more desirable by working out countless drink and otherwise specials and discounts throughout the French Quarter, the simple fact remains that paying to attend PyrateCon didn’t really get you much. Thankfully, PyrateCon I believe has themselves accepted this fact, as they directly expressed to me a hope that next year’s event will be free, with no general admission charge whatsoever. This, I think, will do much to keep the pirate community’s interest and patronage. 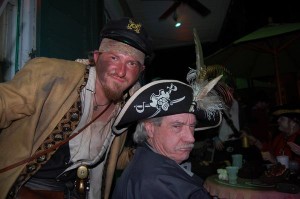 So what about PyrateWeek? Sadly, as I stated in my live event coverage, I was unable to attend nearly as much of PyrateWeek’s own activities as I’d hoped. The one party I did attend was great fun, and the vendors were few but of high quality. That said, the whole affair seemed just too far removed to add much value. I appreciate PyrateWeek’s interest in highlighting the fact that there is a New Orleans beyond the French Quarter, but when it’s already established that Bourbon Street is where the party will be I think it’s overly optimistic to expect droves of pirates to hop on a trolly a half dozen times to support a non-French Quarter event. Also, I just don’t think our subculture is yet big enough to fully support two separate events in such close proximity. So while I support PyrateWeek’s cause, I’m less enthusiastic about their event’s timing. Even if it didn’t directly overlap, hosting it within so much as a month of PyrateCon is forcing the long distance travelers to choose between the two, which I think is ultimately destructive. But ultimately I’m sure the PyrateWeek staff will do what they think best serves their event’s and its attendees’ interests, and I look forward to seeing how they choose to proceed.

All told, PyrateCon remains the imperfect king of the hill when it comes to a weekend of true pirate partying for the non-reenactor sort. No other event – to my knowledge – enjoys such a splendid mix of pirate debauchery and modern hotel and bar-hopping convenience. This remains PyrateCon’s greatest single strength, as you just haven’t lived until you’ve moshed to the Pirates Charles in a nightclub and then grabbed a nightcap or several at the Pirates Alley Cafe – no festival experience comes even close in my book.

One last thing before I finally shut up – I’d like to humbly thank my hosts for the week who put me up in their rental condo, conveniently located just on the quiet end of Bourbon Street (about three blocks past Laffitte’s Blacksmith Shop.) You can check it out for yourself at www.vrbo.com/167750, and I would highly recommend staying there next time you’re in New Orleans. It’s small, but classy and comfy – and the semi-private courtyard can’t be beat. Had I been in better health I’d hoped to have grilled out with some of my radio listeners – alas, maybe next year!