Over the years, I’ve begun to look at a newly arrived article of pirate clothing as essentially a starting point, rather than a complete product in itself. A proper pirate look requires age and character. It requires clothing that looks like it’s sailed the seven seas, and participated in a battle or two. Getting a new garment to look old is no small task – it takes a lot of guts to beat up a new item that you spent real money on. What follows is my own experience with modifying my custom Reconstructing History Short Jacket, so that readers might know what they can do, and what they should avoid.

To start, I should explain why I opted to dye my jacket in the first place. In short, upon trying on all my new “period correct” garb – especially assembled for my first trip to Pirates in Paradise – it dawned on me that virtually every stitch of clothing I was wearing was a shade of oatmeal. Even though each item was outstanding on its own, all together it looked like a potato sack. I needed to add some variance in the color. I contacted Reconstructing History to seek their recommendations in dyeing my hemp jacket, and they suggested I use dye from The Dharma Trading Company, also advising that Dharma had excellent instuctions on their website.

I ordered two dye colors, along with the necessary extra chemicals and whatnot. I did some test dyes on some scrap osnaburg cotton, and found the colors quite different from what I’d expected from the charts on the website. However, the colors they produced were still quite suitable, and I opted to dye my jacket the darker of the two.

I followed the Dharma instructions to the letter, opting for the “tub dye” procedure rather than using the washing machine. I used a giant plastic tub, and kept the jacket moving through the dye bath with a large stick. I did, however, use the washing machine for the final rinse. The instructions said to do so on hot, which made me a little nervous, but being as I was working with chemicals I wanted to make sure the rinse was thorough, and therefore stuck with the instructions. 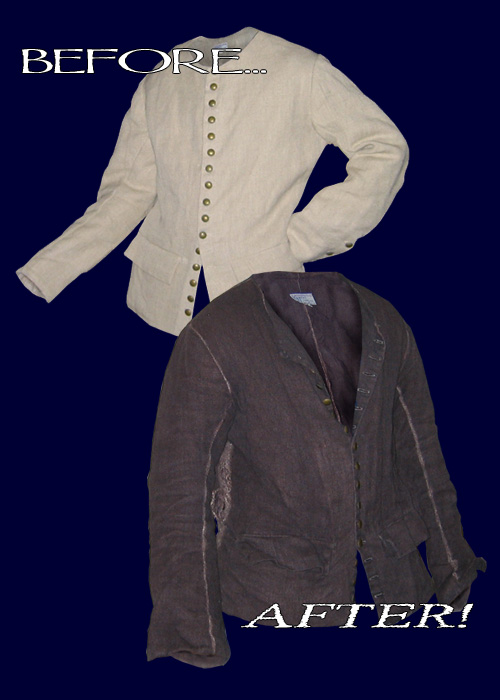 The Dharma dye worked like a charm. The final color, while not what I’d expected from the website, was a wonderful shade of faded gray. The jacket itself, however, experienced several unexpected changes that, while perfectly happy surprises for me, may not have been so well received in other circumstances.

Shrinkage – It’s important to note that not all fabrics are preshrunk, and in this case, the hemp in my jacket shrunk considerably. Lucky for me, I’d ordered it on the large side, and the final, post-shrinkage size was virtually a perfect fit. Also, the shrinkage gave it a more hand-constructed look, being less crisp looking. This also was a fine inprovement. LESSON: Hot water can shrink fabric just as much as a hot dryer – especially coarse-weave, natural fabrics.

Stitching – The stitching of my jacket was cotton-covered nylon. This means most of the dye washed right out of the stitching. Again, lucky for me, as this also enhanced the “hand made” appearance of the jacket. LESSON: If you want a consistent color throughout, you might be better off contacting the manufacturer to dye it before sewing, so as to match the stitching to the final color.

Hemp Physical Integrity – Most surprising of all, the hemp in places literally shredded in the washing maching. It did so just beside the stitching, and had it not been for the lining of the jacket, I fully believe the entire garment would have been reduced to rags. But again, lucky me, I ordered a lined coat. This kept the shredding under control, and made the jacket look like I’ve owned it for a decade. LESSON: Coarse weave hemp just doesn’t hold up in machines. Hand wash or dry clean. Or if you’re a true pirate, never wash it at all.

The final jacket is, in my opinion, a one of a kind marvel. It’s perfectly historical and could have belonged to any pirate in the Golden Age, and yet it has the sort of unique character you’d associate with a Pirates of the Caribbean Hollywood pirate – the best of both worlds, in a way. Had I been hoping to look like a crisp, new sailor, my dye experience would have been a disaster. Had I ordered an unlined coat, or one that was sized exactly to begin with, it would have again been a disaster. But instead it was something of a perfect storm of fortunate accidents. Were I to do it again, I would avoid the washer altogether – washing hemp in a machine just seems too risky. If I did use the machine, I would at the very least do so on cold, as there’s no way to predict just how much shrinkage will occur.