So the Pirates Dinner Adventure is expanding to include an adults-only format with the new Treasure Tavern, which is pretty sweet. While *WE* know better, many folks think pirates are just for the kiddies, so it’s always heartening to hear of an adult venue going pirate (as opposed to Treasure Island in Las Vegas, which decided to become “TI” at some point. Boo!)

So yeah, good news there. But what’s up with the news article linked below, written by Richard Bilbao? It posts two pictures – one of the rum girls as thus: 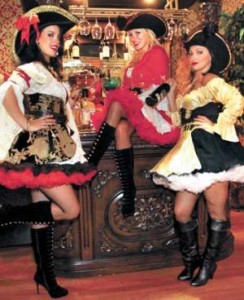 And then a second picture of some construction worker messing with his level: 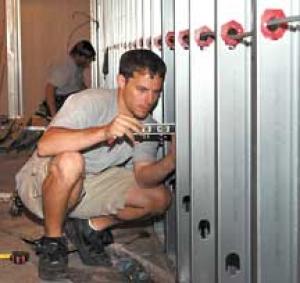 Seriously, Rick – you really missed the boat on this one. The picture of the rum girls is fine. Actually, it’s great. But the construction worker with the knobby knees? What where you thinking? Not only did you miss an opportunity to have a closeup of a rum wench seductively fondling a rum bottle for the camera, but you’ve now plagued my dreams with the nagging question of just what the hell that guy is leveling??? Clearly not the beams, as they go up-down-wise, while his level is side-to-side-wise. So seriously, what the hell is he leveling? Inquiring minds must know!!!

Read the full article here, even though it gives no clues as to the leveling mystery: