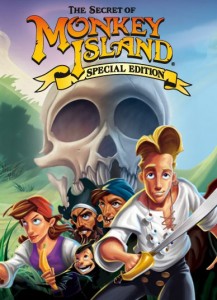 Not even a full day since learning of the pending Tales of Monkey Island, and already I also learn of The Secret of Monkey Island: Special Edition. That’s right – the original game in a scene-for-scene remake with better graphics. And if you’re leary of that, at any point you can revert to the original graphics with a mere press of a button. All sorts of fun details including artwork, videos, and other monkey stuff at www.monkeyislandspecialedition.com. Also check out the blog of Monkey Island’s original creator for lots of other Monkey Island gossip.

What, still not satisfied? Fine – check out the sweet new Monkey Island merchandise over at the Lucasarts Store.

I, for one, am utterly flabbergasted at how now – after most of us had accepted a Monkey Island-free future – we’re being treated to this deluge of monkey madness, to say nothing of how they managed to keep this all a secret until just before the release dates. It makes me what other surprises they have in store – a movie? a line of insult-driven cutlery? premixed grog?

2 thoughts on “When it Rains (Monkeys) it Poors (Monkeys)”