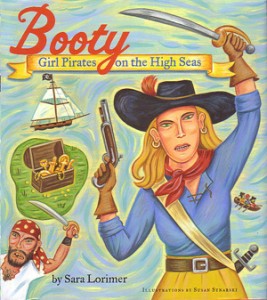 Girl pirates were a rarity. In the male-dominated world in which pirates resided, coupled with the complications aroused (heh) by women at sea – real and imagined – there just wasn’t much room for femine scallywaggs wishing to engage in a bit of pillaging and Spaniard skewering. But as in any time period, there were a few headstong lassies who found the gumption within themselves to buck the system and take to life of piracy. Anne Bonney and Mary Read are the two most famous, and certainly the only lady pirates the average person might be able to name. Grace O’Mally and Cheng I Sao have found their ways into the hearts and minds of hardcore pirate enthusiasts, but any other female pirates seem to elude all but the most diligent historians.

Author Sara Lorimer has attempted to remedy this unfortunate situation with her book Booty: Girl Pirates on the High Seas. Through a series of short stories and fanciful illustrations (depicted in a vaguely Picasso-esque manner by Susan Synarski), she shares the tales of no less than twelve female pirates. Included are of course the four mentioned above, as well as eight more she-pirates from around the world, such as Rachel Wall, Fanny Campbell, and Lady Killigrew. Also covered is New York’s Sadie the Goat*, along with an Indian Pirate Queen whose name has sadly been lost to history.

Each story is covered clearly, concisely, and entertainingly. The writing style is suitable for most ages, but seems geared towards adolescents. While most of the pirates receive only four or so pages apeice, more than enough detail is present to paint a colorful picture of these forgotten lady swashbucklers.

* I would swear I read in No Quarter Given that the legend of Sadie the Goat was actually a hoax, but darned if I can find the article.