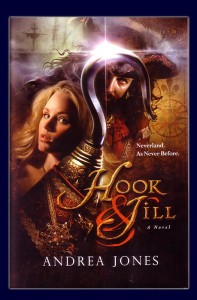 Note: generally speaking, I avoid spoilers in my reviews. But this time I found it tough to avoid, so consider this your due warning – spoiler alert!

In my years of writing pirate book reviews, I’ve definitely seen those that I’ve adored, and others I’ve not cared for. It’s not always a question of quality, either – sometimes a book is well conceived and well crafted, but just isn’t for me. I’d thought that was going to be the case with this review, as indeed, the first 2/3 of the novel Hook&Jill by Andrea Jones simply wasn’t to my taste. But never have I seen such a recovery – the final third of this book felt like setting off a killer fireworks display that you’d spent the entire afternoon assembling – a long time coming, but worth the wait.

Essentially this book begins as the story of Peter Pan as we more or less know it. Wendy and her brothers have spent an undefined amount of time (a month? a century?) in the company of Peter and his Lost Boys. Wendy plays the mother to Peter’s father, and they all continue in an unchanged routine of daily adventures, Wendy’s tales, Peter’s rules about not growing up, and – for Wendy, anyways – a growing restlessness. Growing up is generally considered inevitable, no matter how strongly resisted, and Wendy and many of the Lost Boys soon find themselves longing for something more. No longer fitting into their rigidly defined childhood existence, their eyes turn to horizons outside their simple ‘family’. To some, the Indians no longer seem like “the enemy”, but perhaps just a different way of life – and one possibly to the liking of some of these Lost Boys turned men. So to with the pirates, who indeed have their own adventures, after a fashion, and who live in a world far larger than that of Peter’s eternal childhood. And for Pan himself? While the Indians and pirates may not be so bad after all, it appears that Peter may not be so good. The world of grownups is a complex one, and the world of Neverland is no different.

It all sounds like a brilliant concept for a story – and it is. But it’s not the story I found difficult. Rather, it was the execution, and on two very distinct accounts. First off, author Andrea Jones is a wizard of words and imagery more so than straight-up yarn-spinning. In this I mean she paints pictures with sentences that are just this side of prose. If you remember reading Shakespeare in school and thinking “It all sounds pretty enough, but just what exactly is going on?” then you have a sense of what I mean. That’s not to say Jones is anything as challenging as Shakespeare, but many of her scenes take a precious long time to get to the literal truth of a matter, opting instead to revel in metaphor, shadows, emotions… everything but simply stating the plain facts. It’s a stylistic choice, to be sure, and one that some readers may love. I, however, found it more than a little challenging – especially while reading at bed time.

The second challenge is again as much attributable to my own shortcomings as a reader as they might be to Jones’ storytelling. I just can’t keep up with the changing times of Neverland, it would seem. When Wendy and the Lost Boys begin to grow up, they do so with a vengeance. Far more aggressive than the usual growth spurt seen in normal children, these products of an artificially prolonged youth make up for lost time by crossing the bridge to adulthood at record speeds – not only physically, but emotionally. This in itself isn’t problematic, except that in discovering their adulthood, many of them also discover their own sexuality. This results in some detailed scenarios that initially seem to push the limits of decency (“Hey, Hook can’t do that to Wendy, she’s still a child!!! Wait, is she? [flip back a few chapters] No, I guess she’s gown up by now. I hope. Should I be reading this?”)

Combine these two factors (prose-like writing, and children growing up far faster than my poor mind can process) with a few more smaller factors (a slow pace that addresses emotions as much as events, seemingly half the characters changing their names midstream, etc.) and I found the initial 2/3 of this book a challenge. A fine enough story, no doubt, but a tad more difficult to absorb than the average swashbuckler. But then the final third saw things all fall together. By now, the prose-like writing had become easier for me to follow, and the rapidly aging characters had finally settled into their new lives as adults. But most importantly, these new adult lives were far more gripping than were their late childhoods and reluctant growth spurts.

In no character is this new adult role more pronounced than that of Wendy. Having adopted the new moniker of Red-Handed Jill, she has joined ranks with the pirates and shares a bed with Hook (she’s all growed up now, remember.) And as awkward as “Wendy-sort-of-an-adult-I-guess” was, Red-Handed Jill – the fully established woman and pirate queen – is a downright bad ass. Tough and sexy, a storyteller and leader alike who can bestow cruelty or mercy as the situation dictates, Jill is most definitely a pirate lass worth reading about.

And therein lies the hook (if you’ll pardon the play on words.) This is because Hook&Jill isn’t a single book, but rather it’s the first of a series. It’s an introduction that for me was awkward, and yet it was also entirely effective. Although this first novel may not stand on its own as much as I’d wish, it does intriguingly set a foundation for which I’m eager to see further developed. As the book closes, Hook has become the complex rogue we want in our literary pirate kings, Pan is now the anti-hero, made a villain not through ill-intent, but through a pronounced lack of ability to change (or to allow for change in others, for that matter), Wendy the child is now Jill the entirely awesome pirate chick, and Neverland is a vast sea dotted with countless islands and possibilities yet to be explored.