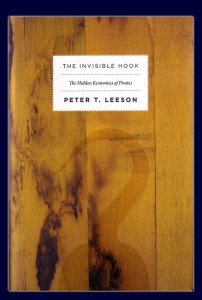 Did your eyes just glaze over?

Did they do it again?

Seriously, most pirate enthusiasts are all psyched about swashbuckling adventure and high-seas glory – words like “economics” are often considered a fast-track to a coma. And yet, economics is something we’ve likely thought about – and discussed with each other – in excruciating detail time and again without even realizing it. Economics, despite popular conception, isn’t a pile of dry mathematical formulas and bland theories, but rather it’s the science of determining why people do what they do. And when economical theory is aimed at our beloved subject of piracy, it’s rather amazing the sort of things that come to light.

The Invisible Hook: The Hidden Economics of Pirates, examines buccaneers through the same lens that one would examine a business. On the surface, pirates were a wealth of peculiar contradictions – villains who would cut off a sailor’s ears, and yet gladly punish that same sailor’s captain for having abused his crew. Pirates; who shunned all notions of civilized society by engaging in rape, pillage, and plunder, and yet who democratically elected their leaders, allowed minorities to serve equally beside them, and even paid disability to their wounded cohorts. Were pirates the greatest humanitarians of their time, or the greatest monsters? In fact, as author Peter T. Leeson explains, they were neither.

Pirates were people, plain and simple. And they were people entangled in a unique web of circumstances that led them to behave in ways that at first seem paradoxical, but make perfect sense when envisioned through such concepts as “decision-making costs”, “principal-agent problems”, “high and low cost signaling”, etc. Through this economic prism, familiar pirate traits such as ship’s articles, the captain’s limited command, and even the Jolly Roger itself take on a newer, clearer light.

Why did pirates do what they did? Short answer: to do otherwise would have hurt their chances at survival and profit. Long answer: read The Invisible Hook. It’s educational, thought-provoking, and fun. The writing is clear and easily digested – a tad repetitive at times, but fascinating throughout. Dedicated pirate enthusiasts may find they have a much deeper appreciation for economics than they ever thought possible, and perhaps pick up some new words to impress folks at cocktail parties as a happy bonus.

2 thoughts on “Review: The Invisible Hook”