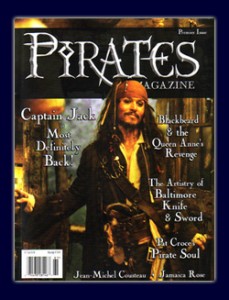 Note: Near the same time as Pirates Magazine was released, a second pirate magazine also premiered. I initially reviewed both, and more recently have re-reviewed the other magazine, looking at it in the entireity of its first year so as to better represent a new and growing publicaton. I have not done the same for Pirates Magazine, because I feel it unnecessary. Pirates Magazine has remained consistent in its quality, and the following review remains an accurate snapshot of what you can expect from this publication.

After some months of anticipation from the greater pirate community, Pirates Magazine began hitting bookshelves just in time to ride the waves created by the recent Pirates of the Caribbean: Dead Man’s Chest movie. Clearly the publisher sought to maximize this fortunate timing, as the cover features none other than Captain Jack himself, smugly basking in the warm yellow glow of Tia Dalma’s hut. It’s a fine cover for catching the attention of new and old pirate fans alike.

The innards of Pirates Magazine is full color through and through, and broken up into feature articles and departments. The features this issue begin with a six page informational piece about the ongoing salvage of Blackbeard’s own Queen Anne’s Revenge. It’s a thorough and informative piece, and is complimented by several pictures of maps, artifacts, and in-progress salvage shots. Also included within this article is much on Blackbeard himself, for those who might need a refresher on this fascinating pirate.

Next on the agenda is the story of Baltimore Knife and Sword – an armory run by Kerry and Matt Stagmer. I wasn’t previously familiar with them, but that I now know they make one of the most gorgeous pirate bowie knife/cutlass sets around. It was a very interesting article, with lots of glorious pictures of the Stagmer’s wares that will make my Christmas wish-list bulge this year.

The feature article on Pat Croce and his (relatively) new Pirate Soul museum was an equally compelling read, complete with a unique photo of Pat “pirated up,” in which he looks truly (and intentionally) frightening. I’ve been trying to visit Pirate Soul for a couple of years now, and have always been thwarted by weather and circumstance. This article does little to salve my wounds – it sounds like a fantastic place. What’s more, this article talks a good deal with Pat about his own pirate interest, and I must say – by founding this museum, owning a genuine pirate treasure chest, and taking dives to view the Queen Anne’s Revenge, it is increasingly clear that Pat Croce is the only billionaire on the planet who knows the right way to spend his fortune!

The final feature article in this issue is an interview with Terry Rossio, co-writer of the Pirates of the Caribbean movies. Now, I have to admit that the timing of this premiere issue pretty much requires some PotC content, although I’m personally a bit burned out on the subject. Still, I was pleased to see that this interview tackled some new territory, addressing some of the mechanics and motivations behind the film, rather than simply rehashing the plot. Subjects ranged from what sort of research was done in the process of creating these films, which characters the writers best related with, and what it’s like to see your creations eventually come to life.

Aside from the feature articles, Pirates Magazine also offers many department entries – many of which seemed the first in ongoing subjects. Of particular note would be the Gypsy Moon photo spread, which featured a male and several female models sporting high fashion pirate-inspired clothing. It was a beautiful series of pictures, with very little text to interfere with the visuals. One or two of the photos seems to be dominated by artistry over actually allowing the reader a decent view of the clothing, but overall it was very good.

Another two department entries – Pirate Pastimes & Pleasures, and The Games Pirates Played – were penned by none other than Jamaica Rose, editor of the long-running (and must-read) No Quarter Given. The first article addresses a variety of pirate distractions, from drinking to wenching to gambling, while the second goes into some detail on various card and dice games, with full instructions for those who might be inclined to gamble in true swashbuckling fashion.

Pirates Magazine goes on with further articles to address a number of other pirate subjects, ranging from model ships to the temporary pirate exhibit at the Mariner’s Museum in Newport News, Virginia (I used to live a mere 10 minutes away from that place, and now that I’m half way across the country – NOW they do a pirate exhibit?!?). Most of these entries are very good and on topic for their target audience, although some of them seem to default towards the publisher’s other interests (Pirates Magazine is in fact brought to us by the same folks behind Faerie Magazine.) The most extreme example would be the first in what seems to be a series of instructional pieces on sculpting life-like fairy figurines. Granted, the example in this case was a mer-fairy, and both the scupture and article itself were beautiful in every respecet – I’m just not likely take up figurine sculpting any time soon, and doubt many of my pirate pretheren will feel differently. Other, more subdued examples would include “A Pirates Journal” (being a poetic romantic piece of fiction spliced with several pictures of a pirate couple, each shot looking like the cover of a dime-store romance novel) and “Sea Dreams” (featuring information and sample art from Vitek Kruta, who creates exotic sea-inspired paintings.) The quality of these aforementioned articles is all first class, but they do seem more fantasy inspired than age-of-sail, and perhaps an ill-fit for a pirate publication. Still, at a whopping 88 pages, this magazine is large enough to cater to varied interests, and time will likely determine the audience response.

All told, I was deeply impressed with this first issue of Pirates Magazine. It offered many interesting articles, loads of glorious photos, and was all presented in a crisp, attractive layout. I look forward to future issues, and can’t wait to see what they have in store next!