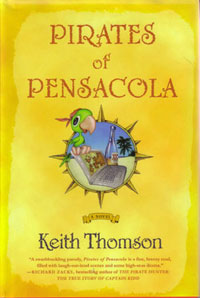 Pirates of Pensacola
by Keith Thomson

This book would be easy to underestimate; its premise of a modern-day classical pirate kidnapping his estranged accountant son in a quest for buried gold sounds like fine material for an over-the-top parody, and its cover featuring a cartoon parrot perched on a lap top computer certainly implies a happy-go-lucky seagoing adventure – yet neither feature betrays a hint of how much is really at work here.

Author Keith Thomson envisions a Caribbean full of modern pirates with roots firmly planted in days of yore. Motorboats and shotguns abound, but so do eye patches and peg legs. Tiny, uncharted islands provide the base of operations for bloodthirsty scallywags as they spend their days pillaging, wenching, and grogging while the rest of the world remains blissfully unaware. Being a comedy, this unlikely scenario could easily be dismissed as a mere quirk of chance or artistic license, but Thomson goes above and beyond the call as he weaves a tale that makes the existence of old-timey pirates not only just-this-side of feasible, but may induce readers to wonder why they themselves couldn’t be so lucky as to have been born in the Sugar Islands.

At its core a fish-out-of-water story, Pirates of Pensacola follows the adventures of Morgan Cooke, an accountant, and his estranged father Isaac, a pirate (who’d been detained by the Florida Penal System for some decades.) Morgan, who’s spent his entire life seeking nothing more than security and a white picket fence, is thrust into a world of scoundrels, brothels, bar fights, and conch-salad sandwiches. He and his father comb the Caribbean in search of a long-lost treasure, all the while pursued by most every sort of unsavory imaginable (up to, and including, a pair of inbred, grudge-toting barbers.) Thomson’s account of their exploits is hilarious, but it’s also exciting and touching. His characters are brimming with personality; they share any range of stereotypical, yet somehow believable, pirate traits. By the same token, Thomson’s descriptions of the various pirate islands and towns flow with so much local color you can almost smell the conch-burger.

Pirates of Pensacola is a fantastic read. Brilliantly clever and funny, Keith Thomson has done a remarkable job creating a world that will ring familiar to many pirate enthusiasts. Familiar, not because we’ve been there, but because this is the world as it SHOULD exist – a world where lopers can drop their day jobs and man a sloop for a proper day of mayhem, where the ship’s cook is a lousy chef but a master gunner, and where, absent email, phones, or radios, communications are carried from island to island by rum-swilling parrot. It’s a fascinating, edgy, wonderful glimpse at the pirate utopia of our dreams, and I sincerely hope Keith Thomson can show us more very soon.