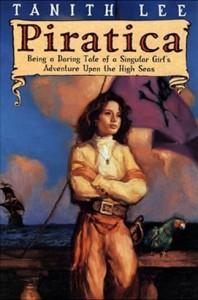 Artemesia is a restless young girl trapped in a boarding school that’s hellbent on making her into a proper young lady. Her life prior to the school is a mystery to all, especially herself, as she’s afflicted with amnesia. But this changes drastically when a whack on the head brings back memories of her late mother, Piratica, and their adventures together on the high seas during Art’s youth. Determined to recapture her former life, Art escapes her boarding school to seek her mother’s old crew and once again pluder the seas of the world. Through luck, determination, and guile, Art seizes her new (old?) life and claims her mother’s identity as Piratica for herself. But while pirating is all she’d remembered, her own past isn’t, so to speak, and Art learns that her memories might not be quite what she, er, remembers.

Set in a world that is almost, but not entirely, a historical version of our own, Piratica is a delightful read full of interesting characters and a wonderfully thought out plot. It does tend to seem a tad simplistic at times – Art is a successful pirate captain largely because she has spunk, moreso than judgement or skill. And the humor doesn’t quite strike home at times. But it’s only fair to remember that I’m a good deal older than this book’s adolescent audience, so my complaints might stem from the generation gap moreso than any shortcomings on the author’s part. What ever the case, it was largely an enjoyable read and would certainly recommend it to any coming-of-age pirates.