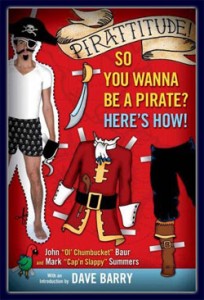 Upon creating a major national holiday, most folks would figure they’ve done their bit for king and country and rest a while. But rest just isn’t in the Pirate Guys’ vocabulary. Since creating International Talk Like a Pirate Day (actually, one could argue International Talk Like a Pirate Day actually created the Pirate Guys, as before that moment, they were just guys), John “Ol’ Chumbucket” Baur and Mark “Cap’n Slappy” Summers have traveled the nation sharing pirate wisdom, written a comprehensive book on the subject (Well Blow Me Down!) and NOW they’ve gone and written yet another masterpiece, Pirattitude!

Well Blow Me Down!, while highly enjoyable, was in many ways merely the Talk Like a Pirate Day Website made physical. Pirattitude!, however, delves into new and exciting depths of our favorite holiday, and at the same time explores new and exciting depths of Chumbucket and Slappy’s psyches (but please, wipe your feet first.) While it does contain some repetition of the first book, Pirattitude is brimming with loads of new material. In it, the Pirate Guys share their thoughts on everything from the history of grog to the do’s-and-don’ts of pirate fashion. They’ve included a new “Pi-Q” quiz, loads of party tips (some more deadly than others), and not one but TWO pirate zodiacs – both eastern and western. I was pleased to learn that I’m a brace of pistols born in the year of the monkey (naturally.) Of course, the karmic flip side is that some poor sap out there has to be an iron bar born in the year of the ship’s goat, but whatcha gonna do?

The most noteworthy addition in Pirattitude! is the focused attention to the titular word itself. The Pirate Guys have told me in the past about their effort to incorporate the word “pirattitude” into mainstream conversations, and they certainly delve into the subject here as they share true stories of pirattitude (including the backstory of our own 2004 Winner of the Flying Dutchman Award for Outstanding Pirattitude), tips on how to better develop your own pirattitude, and even a list of “Has Pirattitude” and “Does not have Pirattitude” celebrities. Personally I found their application of the word a little too lenient – I’m not certain that Steve Martin belongs on the “Has Pirattitude” list (he’s very funny, and I suppose he wore an eyepatch for a scene in Dirty Rotten Scoundrels, but pirattitude?), and while that guy who was out hiking in Colorado last year certainly needed guts to cut off his own hand in order to escape certain death, I don’t recall a single news headline about his getting himself fitted for a hook afterwards*. All told, I’m not certain the Pirate Guys have yet determined the difference between pirattitude and the more conventional “attitude”, but that’s ok – we love them anyways 😉

Like its predecessor, Pirattitude! is a fun read and a worthy addition to any collection – and that goes double for those of us more into pirate fun than pirate history. Cap’n Slappy and Ol’ Chumbucket continue to lead the charge as they promote Talk Like a Pirate Day to ever greater levels of notoriety, and I tip my mug to them.

*EDIT: While we still disagree about Steve Martin’s degree of pirattitude, Ol’ Chumbucket has duly informed me that, following his self-amputation, Aron Ralston DID in fact wield a hook when celebrating Talk Like a Pirate Day. Here at Bilgemunky.com we fully acknowledge that this completley rocks.