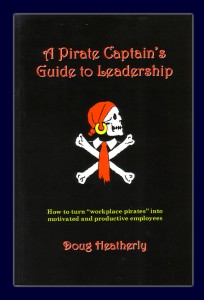 Using piracy as a vehicle to teach a non-piratey subject can be a tricky thing. The difficulty involves the careful balance that must be maintained – too much pirateyness and you lose sight of the substantive content, thereby reducing your work into a mere novelty. But too little pirateyness and… well, maybe that’s not always such a bad thing.

In “A Pirate Captain’s Guide to Leadership”, author Doug Heatherly demonstrates that when it comes to pirates, sometimes less is more. Certainly the book begins with many references to the tactics utilized by pirates and their commanders, and draws numerous analogies to the modern work environment. And indeed throughout the book pirates are referenced time and again – but only when appropriate. After all, there are some subjects that just don’t mesh well with the pirate theme. During the books many references to the mentoring process, for example, Heatherly instead opts to focus frequently on The Karate Kid – hardly a pirate movie, but Mr. Myagi is likely a better mentoring rolemodel than were most of our favorite Caribbean cutthroats (after all, Blackbeard once shot blindly at his own crewmen just to remind them what a bastard he was – hardly a good leadership exercise for todays managers. Well, maybe in Detroit.)

Of course, fans of piracy shouldn’t fear – there’s more to the pirate theme than just the cover and opening chapters. In fact, there is one aspect of pirates that’s a recurring theme throughout, and that would be the very real challenge that managers (Pirate Captains) face each and every day while trying to guide, train, and manage their staff (Crew.) And most of all, what of those amongst the staff that are more dead weight than productive team players? Those that spread gossip and rumors, find ways to look busy while doing little, and in other ways seek to do (or appear to do) only just enough to not get fired? These are what Heatherly refers to as “Workplace Pirates”, and finding ways to take an office populated with such miscreants and getting a successful team out of it is a large part of this book’s focus (although, unlike some real pirate captains, pistol-whipping is not recommended as a leadership tactic.)

Let’s talk nuts and bolts for a bit. In case you’ve not already concluded, this book is *not* a leadership manual written in pirate-speak to make it seem interesting, or inundated with Pirates of the Caribbean analogies vaguely linked to workplace scenarios. Instead it’s a very real leadership book written in a plain, easy-going manner, and with pirates frequently – but not always – used to kick off concepts and add a touch of additional interest. Readers seeking pirate literature for its own sake should look elswhere. But future and current workplace leaders, pirate fans or otherwise, shouldn’t hesitate to pick this book up and read it from cover to cover. It’s first and formost a leadership book – one written for real leaders who deal with real challenges. And hey, if some of the concepts discussed were utilized by Morgan, who’s to argue with that?