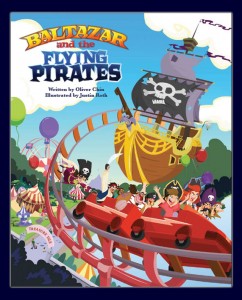 Let’s see… a jolly band of misfit pirates take their flying ship to an amusement park in search of treasure – while there they’re bombarded with parents wanting to take pictures, kids thinking it’s ok to climb on the pirates, and security guards who just don’t understand that it’s all in good fun…

Sounds like a typical weekend to me. Well, except for the flying ship. Someday, maybe.

Baltazar and the Flying Pirates is more or less the tale I just described, brought to life in colorful, friendly artwork. The pirates are a misfit crew indeed, with some members you may recognize (Anne Bonney, Long John Silver) and still more that are new to this story (Flynn, Captain Redlocks, Big Queeq, etc.) Each is a character is unique and memorable as their names, to say nothing of the story’s “every boy” protagonist, with the truly unusual name of Baltazar.

It seems that Baltazar’s ancestor played a key role in the burying of the pirate’s treasure, and now he knows the secret thanks to a lifetime of bedtime stories, and so he was elected to serve as the pirates’ guide. That the treasure’s secret location is now also the site of an amusement park only adds to the challenge (and to the fun.)

It’s an amusing story that should be well enjoyed by any younger buccaneers, along with their parents, older siblings, or captains.

2 thoughts on “Review: Baltazar and the Flying Pirates”