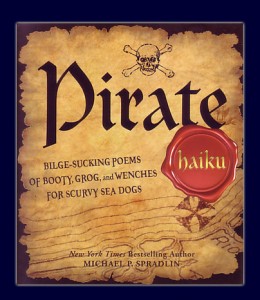 Pirate Haiku is exactly that – 185 pages of haikus (one per page) about pirates doing piratey things. And while haiku purists might point out that while the 5-7-5 format remains intact, very few of these poems exhibit the meditative qualities or the kigo generally required in Japanese hai…

Wait, what the hell am I saying? This is supposed to be a review of a pirate haiku book, and I’m prattling on about the lack of seasonal references? Who cares, so long as there’s rum and seaborne violence? And Pirate Haiku dishes these up in abundance. There is, in fact, an entire chapter dedicated to rum, and another to wenches. And another, even, to pirates vs. ninjas, which would seem fitting considering the book’s format.

As East and West meet
form’s purity may waver
but rum reigns supreme
-Bilgemunky, 2010, summarizing Pirate Haiku is the most smartass way he can muster

Pirate Haiku would seem a perfect bathroom reader – something to pick up and grab a random page now and then. But in this it’s misleading because, to my own surprise, Pirate Haiku contains some semblance of a plot. These aren’t random selections, but rather poems with a progression from one to the next. A story is told, references revisited, and in-jokes formed and enjoyed. And this is what sets Pirate Haiku up a notch or two from being a mere collection of silliness. It should be enjoyed from beginning to end and in that order, because at the end of it all there is indeed a madness behind the method.