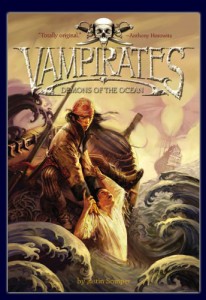 Vampirates – is there a combination of archtypes that were ever more perfect to be merged? Actually, I generally think yes. Despite the play on words made possible in their names, vampires and pirates seem to have very little room for creative overlap. Pirates drink rum, vampires drink blood. Pirates suntan, vampires burst into flames. Pirates spread joy and sunshine wherever they go, vampires spread only misery and despair. See? Incompatible. And yet, author Justin Somper actually does a decent job of bringing these two entities together into a relatively cohesive and entertaining package.

Vampirates: Demons of the Ocean, is the first of at least six stories in the Vampirates series. The tale begins with Connor and Grace Tempest, two recently orphaned teenagers whose late father had often comforted them at night with a unique sea shanty about, well, vampirates. Clearly Mr. Tempest had a thing or two to learn about appropriate bedtime songs, but this becomes a moot point with his unfortunate demise, leading the Tempest children to flee their island home lest they find themselves in an orphanage (or worse, adopted.)

Sailing off in their father’s ship, Grace and Conner run afoul of the weather, are sunk, and separated. Conner finds himself rescued by a ship of pirates. Not vampirates, mind you, but the regular kind. I mean, some of them went to ‘pirate academy’ and everything. Conner’s introduction to, and gradual initiation into, the pirate crew makes for a fun read – for me actually more fun than the vampires, but I’m crazy that way. The captain, Molucco Wrathe, is a brilliant character (and well portrayed if you listen to the Audible version of this book), and the continual friction between himself and his no-nonsence first mate Cheng Li makes for some intriguing interaction.

Grace was also rescued, but while Conner was fortunate enough to find himself in the merry world of piracy, Grace’s own fate is darker. At first locked in her room and only allowed to interract with a single crewman, Grace eventually learns that the ship is crewed primarily by… are you ready for it?… Vampirates. Actually, it’s not as silly as it sounds. The mysterious vampirate captain seems a kindly, but tormented creature, who’s constantly fighting to maintain control of a crew of hungry vampires. The ship itself seems less intended for piracy, but more as a drifting halfway house. In this way the needs of the vampires are met, while also protecting the outside world from the evil they might otherwise unleash.

Where Conner’s adventures with the pirates is a whirlwind journey, Grace’s is slow and somber. The chapters bounce from one to the next and back again, and they play rather well off each other. Vampirates is primarily a book for young adults, and mostly it translates well enough to an adult audience as well. Actually, my only concern with this book was the world in which it takes place – namely in that I wasn’t sure when or where the hell it all was. Initially I’d assumed the 17 or 1800’s, as this is common for most pirate stories. But references to technologies more appropriate to the industrial revolution (and even later) left me wondering, as did some of the attire worn by the vampires (including a 1920’s flapper ensemble.) Eventually it became evident that the story was meant to be somewhere areound 2500, so I was only about a thousand years off. I guess that explains the existence of a Pirate Academy, which still strikes me as bizarre. But hey, Somper made Vampirates seem feasible, so why not a Pirate Academy as well?

Vampirates: Demons of the Ocean is a fun, well-told story. Considering that it’s intended for young adults, it’s actually very good indeed. It does feel incomplete as a tale in itself, but that’s why god created sequels.

5 thoughts on “Review: Vampirates – Demons of the Ocean”