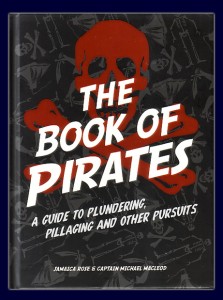 Authors Jamaica Rose and Captain Michael MacLeod are no strangers to sharing their piratical wisdom. Indeed, they’ve been the primary forces behind the pirate trade publication No Quarter Given for, what, 17 years now? That’s a long floggin’ time, and the sheer volume of their pirate travels alone makes them well suited to the task of ushering our young adults into a wider world of swashbuckling adventure.

The Book of Pirates is a book. Not a picture book (although it has pictures) and not an activity book (although it has activities.) Rather, it’s meant to be read – like a novel. But it’s also meant to be taken in parts, with sections on the history of pirates, the details of their weapons, the stories of famous pirates, the secrets behind pirate flags and ship’s articles… These are the intermidiate steps for kids (or adults, for that matter) that want to learn more about pirates than what they can get as younger children, but who also want to maintain a sense of fun, to build their own pirate costumes and foam pirate swords, and who want to hang out with their friends drinking (nonalcoholic) grog and singing pirate songs beyond those taught to them by Disney.

Perhaps it should have been called “The Book of Pirates: Everything about Everything to Do With Pirates for the No Longer Young but Not Yet Old”, because that’s indeed what this is – suggestions for choosing pirate names, recipes for a pirate BBQ, stories of Blackbeard, Rackham, O’Mally, and so forth. Explanations of how to play games that pirates played, detailed accounts of the origins of buccaneers, fencing techniques, pirate insults, legends of sea monsters, etc. etc. All of it in detail, and yet written plainly and simply, with helpful illustrations and a sense of friendly (yet villainous) fun throughout. Worth every penny and a must have for any pirate wannabes who want to go above and beyond blindly waving a twig in the air and yelling “yarrr.”

3 thoughts on “Review: The Book of Pirates”