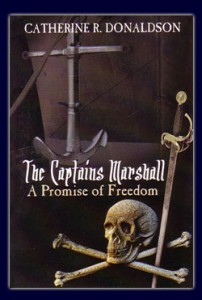 The Captains Marshall is the tale of two young cousins, Giselle and Saoirse Marshall. Following the early demise of their twin fathers – a couple of respected, good hearted shipbuilders. Their cruel grandmother seeks to get the girls married off as soon as possible – the cousins’ own feelings on the matter be damned. Rather than succumb to the lives of high society wives, Giselle and Saoirse coerce their fathers’ former coworkers to help them steal a ship and join them in a life of adventure and piracy.

Well, sort of. In practice, the Marshalls and their crew take great pains to prey only on evil-doers (read that, other pirates), as well as ensuring they fight to wound and injure – never to kill. It’s a noble goal, to be sure, but also a somewhat simplistic notion for such a brutal trade in difficult times. I was initially inclined to lightly criticize Catherine R. Donaldson – the book’s author – for taking such a naively pollyanna approach to her pirate characters, except that Donaldson threw a curve ball – her heroins’ good intentions bite them. Hard. And in this way, unexpected questions are raised with the reader – questions of morality, responsibility, and consequence.

I don’t wish to give away the story, but suffice to say this wasn’t the only curve ball lofted by Donaldson in this book. The Marshall girls, for example, seem to achieve remarkable success in their new roles as co-captains. Again, much like pirates with a no-kill policy, enjoying such success with so little proper training or practical experience seems a bit canned and simplistic. But then these very same, strangely successful, lady-pirates address this issue themselves, wondering at their strange fortune. It’s an issue that’s not explored as fully as I’d have liked, but that it was addressed at all makes the unlikeliness of the situation easier to digest.

In crafting her tale, Donaldson takes several unlikely tacks. From her strangely gifted young captains to explorations of how no good deed goes unpunished, she navigates subject matter seldom addressed in pirate literature. But in one respect she truly, overwhelmingly braves new waters entirely – this book merges piracy with a female temperment.

Now clearly, this is hardly the first book to feature female pirates. Nor is it the first to be written by a female author. But there is one key difference. Every other book I’ve read that stars female pirates (regardless of the author’s gender) is a story of women being out of their elements – women trying to adapt and survive in a brutal man’s world while doing man’s work. But in The Captains Marshall, while there is certainly some of this same element, it is much more an experiment in how a pirate ship and crew might be affected by a more maternal approach. Giselle and Saoirse create a pirate crew that is a true family. They are caring and motherly in their approach, and therefore they mold a crew that is entirely different from any other. It’s this exploration that sets The Captains Marshall apart from other stories of pirate women.

The Captains Marshall was an easy, enjoyable read. It did come across as unlikely at times in the ease of its heroins’ success, but this was offset by the author’s careful consideration of how piracy might be reinvented from a motherly perspective. It’s a strange and bold subject to tackle, and one that isn’t without reward.