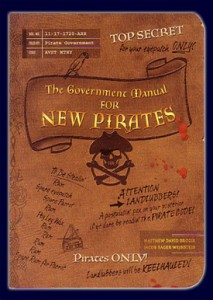 Bookstores are increasingly full of “Government” and other instructional manuals of a fictitious nature. Whether you’re seeking to be a spy or a superhero, hunt zombies, dragons, or wizards – a manual exists to educate and guide you in your endeavors. The problem with this genre – at least, the part that makes me nervous – is that manuals in reality can be tediously dull, and simply replacing mundane scenarios with something more ludicrous doesn’t necessarily make it entertaining. It takes writers with a very special talent in order to build humor on such a dry foundation, but The Government Manual for New Pirates succeeds in every respect. The cover left me unsure what to expect, being a government-style with fairly cliche pirate graphitti. But any fears I may have had as to the quality of this book’s content were instantly put to rest upon reading the forward. These same fears were then shot through the head with a harpoon and buried in tar upon reading the first paragraph of the first chapter, in which anyone who’s purchased this book is advised to put it down and give up their piratical aspirations, as a true pirate would have stolen it.*

Chapters are broken down into what you may expect, with instructions on sailing, fighting, drinking, and talking like a pirate (plus a special mention of September 19th, also known amongst pirates as “Talk Like a Landlubber Day.”) The nature of these instructions ranges from the amusingly whimsical to the hilariously bizarre. Suggestions to alternate your eyepatches daily to avoid uneven tanning, the best ways to hire a new pirate intern, and how to cheat during a duel (best method – kill your opponent in his sleep the night before) all serve to illustrate the sort of good natured piratical guidance contained within. And if that’s not enough for you, there’s also a cut-out eyepatch you can wear (and a yiddish-pirate translator.)

The Government Manual for New Pirates couldn’t be further removed from the tired, worn-out pirate jokes and stereotypes one might expect. It’s witty, funny, and fresh. True, stereotypes abound (it wouldn’t be piratey if they didn’t) but they are used as springboards for the authors’ novel humor, rather than left to be funny in themselves. The result is a wickedly entertaining book that should be enjoyed by pirates, and pirate-wannabes, alike.