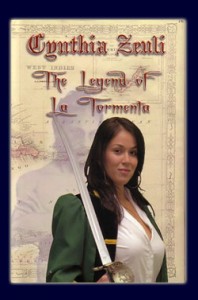 The Legend of La Tormenta
by Cynthia Zeuli

“The Legend of La Tormenta” by Cynthia Zeuli is the sort of pirate novel that would be easy to underestimate. First impressions can make a powerful impact, and this book’s first impression – like so many books – is made by its cover. And while we all know that covers can be misleading, it’s tough to take seriously a historical-era pirate novel graced with a photograph of a girl in a costume store bargain-bin outfit (complete with ill-fitting men’s suit shirt). Actually, the cover’s concept is clever and apt, as the pirate girl is flanked by the ghostly image of a man – very fitting indeed. But it’s poorly executed. Strike one. Strike two comes within the first few pages, as we learn that she-captain Tessa Santiago commands the Pilfering Pussycat. The charms of alliteration aside, it seems a silly name for a pirate vessel, and unlikely to inspire the desired reaction from potential prey. Personally, I groaned just a little.

So that’s two strikes early on. And the third strike? Well, there really isn’t one. Once we accept these two, relatively unimportant factors – a poor book cover and a silly ship name – it all sort of comes together after that.

“La Tormenta” is a tale that begins only after one of the two primary characters dies – that being the just-executed husband of the aforementioned Tessa. Inexplicably finding himself not quite as dead as he’d expected (but not as alive as he’d like), the freshly-deceased Craig enlists his widow’s aid to rejoin the living. In the hands of a lesser writer, this could easily turn into a fantasy ghost story, but Zeuli deftly keeps things just this side of the unknown, and the supernatural elements are trimmed in the subtle tones of voodoo, and avoid the pitfalls that might turn this into high-seas ghostbusters. Yes, a spectre walks and talks, but it strikes the other characters just as oddly as it does us – which makes it work. And as this tale ventures forward, it also becomes – not so much complex – but surprisingly shifty. As in real life, the initial course of action must sometimes give way as new factors spring forth, and this story’s path varies widely as it reaches its eventual conclusion (which proves a little sudden, but not dissatisfying.)

I found the story intriguing and entertaining, but what really kept my attention were the characters. From pirates to voodoo ladies to naval officers, Zeuli delves into the lives of multiple figures throughout. While I’ve found similar approaches somewhat overwhelming in some books, the characters throughout “La Tormenta” prove deeply crafted, and their internal motivations and back stories serve well to enhance – rather than distract from – the primary story.

“The Legend of La Tormenta” is an enjoyable pirate novel. Neither high-brow literature, nor gratuitous pulp fiction, it lies comfortably in between. The mix of character, action, mystery and voodoo all weave into the sort of book that’s first and foremost a fun read.