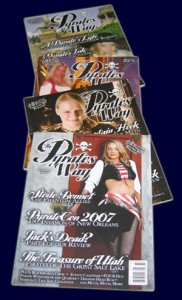 Note: This is the second incarnation of this review – the first being limited to a review of the first issue alone. What follows is a better rounded view of the magazine as a whole.

The most evil thing about reviewing a magazine is that one issue is not the same as the next. And while one would hope for some level of consistency with regards to quality, this is not always the case – especially for a fledgeling publication that may still be finding its footing. In my original review of Pyrates Way’s premeire issue I noted that I found the issue to be entertaining and informative, but significantly lacking in some of the more refined aspects of the magazine art (quality photography and layout, editing, etc.) Now that Pyrates Way as seen through its first year on the scene with four quarterly issues, it seems appropriate to look back and consider how this magazine has grown into itself.

Having delved (and re-delved) into these first four issues, I think that Pyrates Way is doing rather well for itself. It is still very much the magazine it was in that premiere issue, but moreso in the good ways than the bad. Issues have boasted a healthy mix of historical pirate articles (black powder weapons, Stede Bonnet, pirate food) and somewhat more atypical contemporary pirate articles (Quaker Oats’ Jean LaFoote, the Pastafarian Movement, Pirates of the Great Salt Lake). This makes for a magazine that caters to varied pirate interests, both by re-exploring familiar territor and by plunging into hitherto under-addressed subjects. My only real complaint regarding Pyrates Way’s content would be its ongoing series of “reviews” of the second two Pirates of the Caribbean films, each being a reprinting of Disney PR material, and broken out over multiple issues apiece. Sadly, the first parts of these articles were old news before they even reach the news stand, and parts 2 and 3 are beyond dated. But with the final movie having run its course, this would seem a self-resolving problem.

From a presentation perspective, Pyrates Way has certainly improved. It remains rough at times, but the grammar isn’t nearly the fright it was originally, and items such as jarring font choices or odd photograph selection seem largely shaken out since that first issue. The Wench of the Quarters have also improved. It’s still a rare treat to see a truly inspired Wench photo grace this section (such as Kaitlyn of Spring 07), but at least the truly spooky ones seem to be on the downswing (I won’t name names – but two in particular scared me witless.)

Pyrates Way is clearly a magazine born of love and enthusiasm for the subject of Piracy (sorry, Pyracy). I share this sentiment, and will look forward to seeing what they have in store in the coming year (I’ve recently renewed my subscription.) It was and remains a magazine for and by pirates. If you want polish, look elsewhere – but if pyracy is your lot in life, I think you’ll find it a worthy publication.