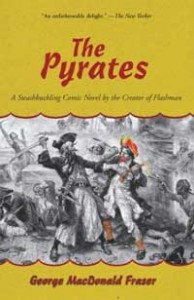 The Pyrates
by George MacDonald Fraser

Now here’s a gem that’s escaped my notice for far too long. First published in 1983, The Pyrates is certainly as fresh and witty today as it was back then. Taking place in a non-specific part of the Golden Age of Piracy, the tale ranges from England to Madagascar to the Caribbean, and features the wildest cast imaginable. The characters are highly (and intentionally) stereotyped, and this is put to great comedic use. The hero, Captain Ben Avery, is brave, dashing, and impeccable in every fashion. The author makes frequent mention of his manicured nails and chisled jawline. Indeed, Avery seems perfect in every fashion, so it should naturally follow that every woman in the book swoons after him, be they admiral’s daughter, pirate queen, Spanish maiden, or missionary nun turned tribal goddess and chocolate addict. Whatever their role in this book, each of these women share one thing in common (aside from their lust for Captain Avery, that is) – each is heart-wrenchingly gorgeous, and each knows how to play that to maximum effect. They pout when they need to pout, scream appropriately when a damsel-in-distress scenario is called for, and slump to the ground to lie in a vulnerable-yet-alluring position when knocked out cold by the bad guys.

As to the bad guys – who might they be? Well, that’s debatable. The author clearly shares our soft spot for pirates, and as such they’re only marginally treated as “bad guys.” Like Avery and his women, they are heavily stereotyped, although a bit more diversely as they range from the sturdy Captain Rackham to the dashing Black Bilbo, and even to the hulking Firebeard, complete with fuses in his bristling chin-hair. Each draws clear inspiration from both history and cinema pirates, and each is hilarious and wonderful in their own right.

The story itself revolves around a crown destined for the King of Madagascar. Placed in the charge of Captain Avery, he’s soon betrayed and the crown is split into six pieces and divided amongst six pirate captains, scattered throughout the seven seas. Now Avery must regain the pieces, bring the pirates to justice, and reunite with his Fiancée. That’s really about it for plot, but anything deeper would only serve to distract from the wide range of adventures that follow (lost treasure, head-hunters, carnivorous octopods, angry Spaniards, publicity agents, betrayals…)

At just over 400 pages, this book should keep you busy for a while. It’s irreverant and hilarious, poking shameless fun at every pirate and nautical cliché imaginable, but doing so with great affection all the while. The more immersed you are in pirate history and pop-culture, the more you’ll enjoy its wit and references. In fact, I’m fighting off the urge to rent every Errol Flynn pirate movie I can find, and then to read this again just to see what I missed the first time around. Great, great fun.

5 thoughts on “Review: The Pyrates”