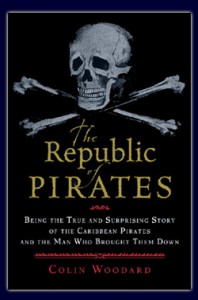 I’ve often stated my aversion to “general history of pirates” type books. They quite often cover the same turf as each other, and so many names and events tend to blur together in my wee brain. I’ve also lamented the inherit dryness often found in some historical texts – too many details and too little drama don’t bode well for a book unless I’m hoping to use to help me fall asleep. Fortunately The Republic of Pirates has me covered on all accounts – it’s well written and entertaining while remaining informative. And it doesn’t endeavor to be an all-encompassing “who’s who” of pirates. However, author Colin Woodard does take a unique approach by focusing on, not one pirate, nor all pirates, but instead a small batch of pirates – several household-name pirates who were in fact contemporaries, cohorts, and even friends.

Blackbeard, Black Sam Bellamy, Charles Vane, Stede Bonnet, Henry Jennings, Benjamin Hornigold, and indeed several others were partners-in-crime to a greater or lesser extent many times during their brief moments at the forefront of Caribbean piracy. And it’s through this prism that Woodard shares their tales. Offering facts where he can, and speculating where he must, he traces the lives and careers of each of these men, from boyhood to gallows (or other manner of “retirement”, as the case may be.) In doing so, he not only conveys the stories of these extraordinary men, but also the tales of all sailors of the day, and indeed, much of the Caribbean and American colonies. Pirates, of course, weren’t an isolated incident that occurred within the Caribbean, but were deeply engrained and intertwined throughout the colonies – in many ways the history of the new world is the history of pirates, and Woodard shares it all.

There is one other figure who’s career is traced through these pages – that of Woodes Rogers. Not a pirate, but rather the man who sought to defeat their unlawful empire, Rogers is every bit as fascinating as any scallywagg you could name. Seeing how his own life both parallels and contrasts those of his adversaries is an incredible study in itself.

The Republic of Pirates is in itself a contrast – a book full of characters we all know, but few people could tell you WHY we know them, let alone how they may have known each other, shed blood together, stolen ships from each other, and so on. Learning the stories of these men (and women) from such a perspective adds a remarkable humanizing element that is often missing. Blackbeard comes off particularly well in Woodard’s interpretations, being a scoundrel more interested in bloodless conquest through fear and theatrics, rather than brutality and pain. Being less than a historical scholar, I can’t speak to the accuracy of this, but I do enjoy the opportunity to look on Blackbeard as a decent, if not exactly law-abiding, fellow.

The Republic of Pirates is an excellent read. It offers a highly enjoyable take on many of the pirates we all know, while offering an incredible “whole picture” view of the state of piracy during this very brief segment of the golden age of piracy. Highly recommended.

1 thought on “Review: The Republic of Pirates”