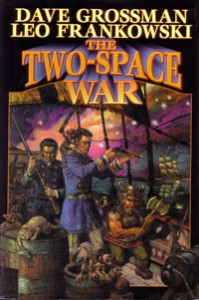 The Two-Space War is a combination of things that should generally never be combined – Napoleonic naval warfare, space exploration, and Tolkein-inspired races (elves, dwarves, etc.) But in the hands of authors Dave Grossman and Leo Frankowski, these varied elements begin to feel surprisingly natural. The basic premise is that mankind has begun to travel the galaxy by accessing the second demension, or Two-Space. Far from being Star Trek gobbledeegook, the concept of removing the Z-axis from our ordinarily XYZ, three demensional, existence would necessarily have the effect of bringing things closer together – a planet might be a thousand lightyears “above you” while being only a few miles to your right – crushing the galaxy flat would certainly bring you much closer to such a destination.

In this book, traveling through Two-Space does have its quirks. Chief amongst them is that the environment is corrosive to technology. Computers, engines, and even automatic weapons become useless in a matter of hours. And so the races have learned to travel through the flat seas of Two-Space using methods long since considered obsolete – with wooden ships, powered by sails and protected by muskets and cannons. This throwback technology has also spurred a throwback culture, or retro-culture, whereby people shun innovation and instead look to tradition and ancient literature for guidance. It could all sound very gimmicky, except that the authors have stayed so consistent within their premise that the concept of sailors traveling through this techno-destructive world seems as natural as gravity and television do in the real life.

The story begins with Leuitenant Melville, a fairly fresh and unproven officer in the Westerness Navy, finding himself crash-landed on a new planet and suddenly in charge of a crew of humans, with a dwarf and elf serving alongside. And then the alien monkeys attack – and that’s when this book quickly shows its utter brilliance. Sailors armed with 19th century technology, allied with dwarves and elves, and defending their crashed space-ship against ravenous alien monkeys is a completely bizarre – and easily ludicrous – concept. But the authors, one of whom has experience training elite military troops, approach this unique situation with calm, measured analysis, sharing a wealth of battle-tested insight on combat strategy, psychology, and even physiology. This matter-of-fact approach to military matters suitably counter-balances the more fantastic aspects such as elves and space monkeys, and makes for an entertaining – and surprisingly educational – read.

It’s shortly into this first battle that a second group of smaller space monkeys join the fray, fighting alongside our heroes in a shared contempt of the larger brutes. Following victory, these new monkeys find their way amongst the crew, playing pivitol roles in much that is to come.

This book is not about pirates. Pirates aren’t even mentioned until page 181, and then only in passing. But this book does have proper masted ships, and – as stated – space monkeys. However, in the final chapters the story itself seems that it’s only just getting started, as though this were the beginning of a series. Many questions remain unanswered. Perhaps the authors are intending to write sequels*, or perhaps wrapping up the storyline into a neat, complete package was never their intention to begin with. Indeed, rather than forcing the plot forward throughout the novel, the authors instead opted to provide great details into the world they created, and even moreso into the inhabitants of said world. Details of the Westerness “retro-culture” is shared in abundance, with much insight into the scholar-warrior mentality that shows an incredible respect for intellect and might alike. And that says nothing of the abundance of strategic exposition, ranging from hilltops to barroms. I never thought I could read a book about dwarves and space monkeys, and then afterwards feel like I’ve learned a bit of what it’s like to serve in the special forces. But that’s exactly the impression it left. I only hope I can remember the lessons in The Two-Space War the next time I’m barricaded in a bar while Elves try to take me hostage. If so, my mates and I just might survive the enounter.

*The sequel for this book, Guns of Two-Space, is available as an electronic copy starting October 2007. Purchase a DRM free download.
https://www.webscription.net/p-648-the-guns-of-two-space.aspx