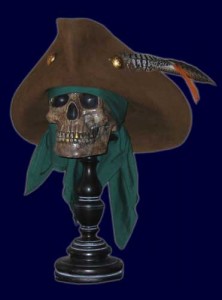 The 18th Century series is a mix of old and new, featuring some styles from his original series, and a couple unique to this new line. For myself I chose “The Buccaneer” It’s a take on the standard tricorn, except that the back section is left free rather than being pinned up or rolled, and creating a novel effect that I’ve not seen before in pirate hats (and providing a nice outlet down your back for rainwater, I might add.) As promised by Jack’s description, the cashmere felt is indeed very soft, although the reverse side is noticeably rougher. As I’ve come to expect with Captain Jack, it’s sturdily built, and the attention-to-detail is beyond reproach. In my hat pictured you’ll notice a smart pair of pheasant feathers tucked into the left button – this is not standard, but feathers are available for purchase seperately (and always remember that Jack can do custom work upon request!)

The soft cashmere of the 18th Century series, free of the sticky oil/wax treatment offered for Jack’s original series, makes for a hat that is comfortable and stylish right out of the box. These hats won’t weather as well as the treated hats. But that said – like all of Captain Jack’s products – these are hats meant to be worn, meant to share in your adventures, victories, and scars. Any signs of age will only add to their character.