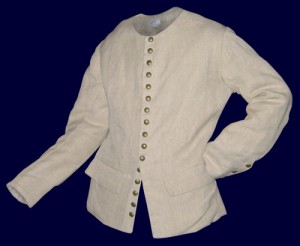 In the winter of 2007, I had my first opportunity to visit Pirates in Paradise in Key West. Not only was it my first time visiting this pirate festival – one that enjoys a reputation bordering on the legendary – but it was also to be my first amongst true pirate reenactors in their element. As such, I wanted to try my best to look the part of a historical pirate. Being as the bulk of my pirate work involves modern and pop cultural elements, the lion’s share of my pirate garb has greater or lesser degrees of Hollywood flair, which usually suits me fine. But for Pirates in Paradise, I wanted something a bit more down-to-earth.

I decided that a sailor’s short jacket might be a fine component to a historical outfit, and after some basic window (read that, online) shopping, I decided on the jacket offered by Reconstructing History. This company enjoys a fine reputation for making truly period-correct clothing, and I thought it high time I experienced their work first hand. They do offer unlined jackets as a stock item, but unlined items often feel incomplete to me – more of a costume than clothing – so I decided to special order. This resulted in a bit more cost, and the order necessarily took much longer to complete, but I felt I would be happier with the end result. The jacket I ordered was to be a custom tailored hemp sailor’s short jacket, lined with linen, and complete with aged brass buttons which I provided to replace the pewter buttons Reconstructing History generally uses (I prefer brass to modern lead-free pewter, being as brass tarnishes better and makes for a more aged & worn looking garment.) Also, because I’m always paranoid about jackets feeling too constricting, I requested the jacket be a bit on the large side. Reconstructing History was very helpful throughout the ordering process, answering all my questions, explaining the feasibility of my requests, and providing a completion date by which I could expect my jacket to arrive (essentially two months out.)

The jacket arrived about a week before the date I’d expected, which gave me ample time to wear it around the house and get accustomed to it before leaving for Key West. It was indeed roomy, and the length of the sleeves did give a slight impression that I was wearing my father’s clothes, but being as I’d requested the jacket be slightly large, I consider this to my own responsibility and not Reconstructing History’s. But not to fear, the design of the sleeves lends itself well to folding the cuffs onto themselves. This not only makes for a better fit, but also gives them a nice, swashbuckling flare.

The construction of the jacket appeared very solid, and the pockets were nice and functional. The design itself is very period, and would likely have been found on many pirates in the Golden Age, being as this was the sort of jacket issued to working class sailors of the day. My only grievance, and one that is essentially unavoidable with custom clothing, was the stark newness of the whole thing – this was a crsip, clean jacket that demanded some wear and weathering! More on that below.

All told, I found this jacket to be pretty first rate. It was comfortable and fully functional – a fine piece of warm-weather clothing. The only complaint a truly hardcore reenactor could offer would be that it’s not hand-stitched, but anyone that detail-obsessed is dangerously close to being certifiable. For those of us on the sane end of the spectrum, this jacket is perfectly period and can easily be a cornerstone for a fine historical pirate outfit.

Note: While in Key West, I had the good fortune to see one of Reconstructing History’s stock sailor jackets. This was essentially identical to my own, except it had no lining. Personally, I was very surprised to see how much a simple thing such as a linen lining improved the overall quality of my jacket – it held a much better shape, and indeed, felt a more complete garment. I definitely recommend forking out the extra cash for a lined custom, if you have the means.

Also note: I fully expect my sailor’s short jacket would have given me years of service straight from the box, but being the restless sort I decided to dye it and truly make it “my own.” You can read about the results at Bilgemunky’s Dye Adventure. I highly recommend reading of this experience prior to making your own initial dye efforts on this or any other historical garment.