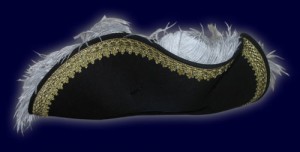 I’ve stated before my belief that a pirate needs a hat – it’s just a matter of which kind. Some hats, such as the red knit cap, were meant for cabin boys – simple and plain. And other hats are meant for rough’n’tumble, working-class pirates who aren’t afraid to get their hands dirty, a ‘la Jack Sparrow’s crumpled tricorn. But that’s not you – you’re a SUCCESSFUL pirate, lounging about your galleon oozing contempt for Spaniard and commoner alike. And you’d never even think of ruining your manicure by working – if treasure needs to be buried, well, that’s what crewmen are for (you can always slaughter them afterwards, aye?)

And so you stand there, alone and aloof in your well-furnished cabin, adorned in a glorious frock made from the finest of materials. You stare at your reflection and ponder sadly at how your outfit seems incomplete. “Surely,” you ask, “there’s a hat out there for me?” Fear not, villain of the seas – Center Stage Costumes is here to serve.

Center Stage Costumes has a wide selection of tricorns, bicorns, and cavaliers, any of which would suit the aristocratic pirate beautifully. I chose the Plumed Tricorn, a glorious hat made from fur felt that’s rich in appearance and surprisingly soft to the touch. The brim is lined with gold trim and painstakingly shaped to highborn perfection. Over each corner a cascade of ostrich feathers spills forth (much like your aforementioned contempt for Spaniards.) All these elements seamlessly merge into a hat that even the Jamaican Governor would envy, and will surely cause female spectators to go weak-kneed as you stare down at them with disdain from the gallows.

I’ve admired this hat online for years, and now that I’ve finally seen one in person, it’s lived up to my hopes in every way. The Center Stage Plumed Tricorn carries a fantastic flare about it, and the quality stands up to even the closest scrutiny. I wouldn’t recommend wearing it in severe weather as this would surely beat down its crisp appearance, but if you’ve a taste for the fancy and are looking to make a true impression, you’re unlikely to find finer.