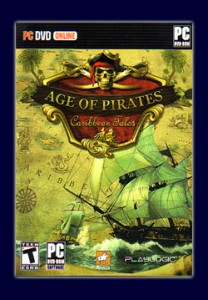 I hate to be so blunt, especially with a game that I had hoped to love:

Age of Pirates: Caribbean Tales is an uncut diamond buried deep within a bottomless dung heap. It could have been great, it should have been great, but for whatever reason it was sent to market incomplete in most every respect, and is therefore not worth your hard-earned doubloons.

I’m an enormous fan of the original Seadogs. For all it’s quirks and bugs, it was still wonderfully fun, and easily set the standard for 3rd person pirate adventure games. Pirates of the Caribbean (Seadogs 2 before jumping on board with Disney) was also flawed – the last minute Disney changes seemed half-baked and disrupted the original intentions of the developers. But just the same, it was quite the improvement over Seadogs, and with the various mods created by fans it soon evolved into an ever-growing pirate world of near infinite options.

So what happened with the third game in this trilogy – Age of Pirates: Caribbean Tales? No last minute Disney meddling to blame this time. Whatever the cause, this game is dreadfully incomplete. From a technical perspective selling this game borders on the criminal – it is virtually unplayable without the patch (released a couple of weeks after the game hit the shelves,) and even with the patch, it is still prone to crashes and oddities (popup screens in russian, for example). But even without the bugs, this game is woefully inadequate. Many features were clearly in development, and then sealed off – churches and banks, for example, abound throughout the islands, but they serve no purpose. The ability to visit random buildings and jungles – such a fantastic feature in Pirates of the Caribbean, is completely removed (although folks wiser in code than myself have explained that the data is there, just locked off.) Personally, I don’t care to pay full price for a video game only to learn that so many of its better features have been removed.

Like in the previous two games, players can follow the primary storyline while engaging in smaller missions on the side. But unlike the previous games, both options are just pathetic this time around. The main storyline is barely there – I spent more time developing my skills to be good enough to tackle the main scenario than actually performing it, and by no small margin. Plot holes leave players wondering what they should do next (searching for secret rooms that don’t actually exist in game) and any sort of proper guidance or intrigue is nearly nonexistent. As to the smaller missions, they are nothing more than milk runs. Gone are the multi-step “investigate this or rescue that” in favor of mere escort and delivery errands. Fun the first time or two, but hardly engaging material in the long run.

The greatest tragedy in all this is that this game should have been a gem. The graphics are gorgeous (when they don’t bug up,) and the islands in this virtual Caribbean seem vast and beg to be explored. Sadly, whatever marvels the developers originally had in store, they never made it into the finished product. Even without the crippling bugs and crashes, this game would remain a mere shadow of its predecessors. The one saving hope is that fans and modders will tackle this game as they did Pirates of the Caribbean and complete the work that others left unfinished.