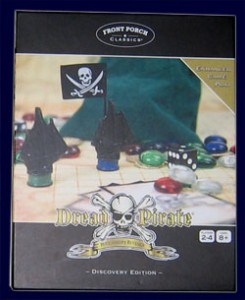 Dread Pirate: Buccaneer’s Revenge is the Discovery Edition’s direct answer to Old Century Dread Pirate (truly one of the most glorious pirate games on the market.) The play area and pieces are virtually identical in shape, if not material, with the only significant difference being the cards. In the Old Century version, the goal was to plunder towns and each other, and to end the game with the most booty – fairly straightforward. But Buccaneer’s Revenge has modified gameplay, sending players forth on a number of missions dictated by drawn cards. The ultimate goal is still to gather booty, and players can still bombard each other in combat, but the additional missions serve to add a bit more variety along the way. And what’s more, upon completing missions, players earn booty and skills that they can use in the future.

Some pirate games are brimming with colorful personality, but Old Century had taken the opposite approach of rich chesslike dignity – simply handling your heavy metal ship, or listening to the metal-on-metal clink as you won doubloons, made the game into an experience. Unfortunately Bucanneer’s Revenge lacks the materials to achieve this stature. And while the mission cards are intended to enhance gameplay, they unfortunately feel like obstacles as often as not. Ship-to-ship combat is primarily a matter of who is luckier with the dice than any sort of tactic or skill, which also doesn’t contribute to the most engrossing game.

Dread Pirate: Buccaneer’s Revenge is a decent game, but I did find my attention wan a bit. Old Century Dread Pirate, through majestic construction and simpler gameplay, did a much better job of maintaining my interest. But at four times the price ($100) of Buccaneer’s Revenge, it isn’t an option for everyone. Personally, if Old Century is too expensive, I would recommend splitting the difference and finding a copy of the Dread Pirate Bookshelf Edition, which has the same craftsmanship as Old Century, simply on a smaller scale (and chimes in at a more attractive $50 or so.) Or if you really don’t want to break above the $25 range, then try Discovery Editions other new product, League of Pirates, might prove a more worthwhile option.